Tuesdays With Tyler: “Shut Up”

The other day for no particular reason Tyler looked at me and said, “Shut up, Mommy.”  I was shocked at my three-year-old’s language.  Where had he learned that from?  We didn’t say “shut up” at home.  Was a teacher at daycare telling him to “shut up”?

I said, “Tyler, saying “shut up” to someone is a bad thing to say and we don’t say that to anyone.  Where did you learn this?”   And he looked at me innocently and said, “Bugs Bunny.” I realized that he had seen the Bugs Bunny cartoon Bugs and Thugs, which also has given us the classic quote “Shut up shuttin’ up”.

Truthfully this is one of my favorite Bugs cartoons.  It’s hard to be angry when your child picks up a phrase so innocently.  I just hope he doesn’t try to hit me with an anvil from Acme products in the future. 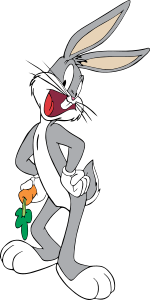 2 Responses to Tuesdays With Tyler: “Shut Up”