On the Sudden Passing of Our Cat

On Sunday she was here and on Monday she was gone.  The trouble started Sunday night. Things were hectic already.  It was after 11:00 and we still could not get Tyler to bed, the result of a too long, too late nap.  I noticed our 15-year-old cat, Spanky, just sitting in the litter box. Knowing that is not a good sign, I called Grant over to take a look, all the while trying not to upset Tyler.  He took her out of the box and she was unsteady on her feet.

We debated taking her in to the veterinary that night, but Spanky was on medication and Grant thought she might have found an old pill in a treat that she ate that night, taking a double dose of her med. That seemed likely to me because we had seen it happen once before.  We made an appointment for her for 8:30 Monday morning.

I woke up before seven and found Spanky curled up in the litter box, eyes open.  She was still warm.  I started to cry.   And I felt like here is another horrible thing to happen to us in our lives where mostly horrible things have happened to us for over three years straight.  It sounds crazy I know, but seeing her like that I felt like there was evil in my home.  Like I am living in the Amityville Horror house. What the Hell had happened to her?

I woke Grant up and he looked at me and said, “She’s dead?”  “I think so.”  Grant picked her up out of the litter box a little and let her go and she fell back down.  I was completely hysterical.

Spanky was Grant’s cat.  He brought her home from a shelter when she was about eight weeks old.  He was in shock.  I knew Tyler would be getting up soon and I didn’t want him to see her like this.  I took her out of the litter box and put her in a basket and put a towel over her.  The other cats were watching me.  I took a shower on my painful feet.  Tyler woke up and I pretended like nothing happened.  I took him to school and then I went back home.  I asked Grant if he wanted to say goodbye to her.  I heard him whispering something like “Thank you for all the years you’ve given me” and then I took her to the veterinary to have her cremated.

The vet said it was most likely that Spanky died from a stroke.  Grant feels a lot of guilt that he didn’t take her in or stay with her, that she died alone, but the vet says taking her in that night wouldn’t have made a difference and that it was good she went quickly.

That night we told Tyler that Spanky went up to Heaven.  His first words were, “So now we only have two cats?” followed by “Which one was Spanky?”, but later he was trying to look for her up in the dark sky.

Spanky was my husband’s cat.  We each brought two into our marriage and we met because of our cats.  I never got super close to her but I am grateful to her for the love and comfort she gave to my husband in the ups and downs of life.  She was our largest cat so her mere presence will be missed.  May she rest in peace and may we see her again someday. 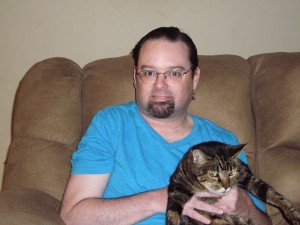 5 Responses to On the Sudden Passing of Our Cat