Robert Schimmel: The Life and Death of a Comedian Forced to Become Invisible

Comedian Robert Schimmel died last month at the age of 60.

Whether or not you agreed with his lifestyle (he left his first wife for his daughter’s friend, and married and divorced her), if you knew his work you couldn’t help liking him.  He was just so honest.  I think of his life as tragically funny. Bob Schimmel had survived a bad blood transfusion, a heart attack and the loss of his 11-year-old son to cancer.

In 2000 he was diagnosed with Stage 3 Non-Hodgkin’s Lymphoma.  Due to his illness he was forced to bow out of his new sitcom that had just started production.

Throughout these hardships, somehow he was still able to make people laugh.  But in the last couple of years of his life he contracted cirrhosis of the liver due to the blood transfusion that he had had years ago.  He needed a liver transplant.

Those close to Bob told him he needed to keep his illness a secret or he would not get booked by comedy clubs and other venues.  His belly distended from the disease, he would wear a raincoat in order to keep his illness invisible so he could keep on working.  I know so many chronically ill people, including myself, who have been forced to hide their pain or fatigue just so they could keep their jobs. Forced to hide swollen joints, make excuses and keep on working through tremendous pain.

Earlier this year, perhaps no longer being able to to be dishonest with his audience, Bob revealed that he needed a liver transplant on The Howard Stern Show.  After that he received support from fans and new fans, many offering help, and even offering to donate part of their liver.  Perhaps people can be more giving and understanding than we sick people realize.

Ironically, Bob died as a result of his injuries in a car crash, although his poor health contributed to him not being able to survive the accident.

He is survived by his father, his sister, a brother, and five children.  I like to think of him now making them all laugh in Heaven.

SheKnows Entertainment was a contributing source for this post. 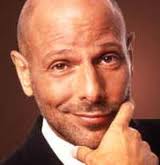 5 Responses to Robert Schimmel: The Life and Death of a Comedian Forced to Become Invisible