How I Met My Best Friend

4.) Describe how you met your best friend.

I first moved out on my own for good when I was 26 years old.  I had moved in with a co-worker and towards the end of the lease she told me that she wanted to try to get her own place, that she wanted to live alone for the first time in her life.  I put an ad in several newspapers, “Roommate Wanted”, and Donna was one of the people who answered my ad. We had a nice conversation on the phone and arranged to meet.  She was about 23 years old and was an accountant working for a pharmaceutical company.  She seemed very mature and I liked that she had a secure job.

For whatever reason, I will never forget the first time I met her.  She showed up to my apartment wearing a long skirt and nice blouse, with her hair pulled back.  She was petite and attractive.  We hit it off and discovered that we had graduated from the same college, I four years ahead of her.  She was super-smart, and was the Valedictorian of her high school class and went to college on a full scholarship.  I knew I wanted Donna to be my roommate.  The only problem was that this would be the first time she would be moving away from home and her parents did not want her to go, and they had a heavy influence on her.  Despite my getting on the phone with her mother to assure her that I was not an axe-murder, Donna told me that her parents said they would disown her if she moved out and she was not ready to lose them at this point in her life.

I was very disappointed but I said that I wanted to keep in touch with her, and she said she felt the same way.  Both of us single, to our mutual dismay, we would go out with each other almost every weekend, usually going to restaurants and trying different kinds of food, like Jamaican and Ethiopian, Donna was always game.  Often we would go to church together.

I found I could tell Donna anything.  She was the most non-judgmental person I had ever met. I had been having an on again/off again relationship with someone.  Most of my friends were telling me that I needed to move on, especially my then best friend who didn’t want to listen to my crying any more and told me that I was just being plain ridiculous over him.

Eventually “Larry” became engaged to someone who worked with us.  Seeing them every day was extremely painful and I dreaded the date of their wedding, August 14th, 1999.  I don’t know how I would have gotten through that day, I honestly don’t know if I would still be here, but Donna and I went out to dinner and then to a classical musical concert at a park, under the stars.  I was experiencing something so beautiful, but also knowing that at that moment the then love of my life was celebrating his new marriage.

When I met Grant and he moved in with me in 2001, Donna became Grant’s friend too and now it was the three of us going out to dinner and having good times.  She was my Maid of Honor when we married.

Donna continued to excel at work.  She was also an adjunct professor teaching a Master’s degree Accounting class at a local college.  She had a beautiful car and owned her own townhouse.

Unfortunately, the mental illness that she had been fighting for many years began to take over her life.  Constantly in and out of hospitals and mental facilities, she eventually was unable to keep a job and had to sell her townhome.  Donna lost a lot of friends during this time, people just couldn’t deal with it, or didn’t want to.  But Donna was my angel and I never considered ending my friendship with her.  I never forgot what she did for me in August of 1999.

Eventually, Grant and I s’ illnesses also worsened.  Donna and I took care of each other as best as we could and we still do.  She is the only friend I can tell absolutely anything to.

Despite Donna’s many mental and now also physical illnesses she is the most amazing, smartest, courageous woman I know.  She is good at  everything she tries, even blogging, poetry and Six-Word Memoirs!

I am also very pleased that there is a mutual love fest between Donna and my son.  Tyler loves his Aunt Donni. She has now become friends to us all.

Donna is one of the reasons I know God loves me.  She is my Angel on Earth and I could not imagine my life without her. 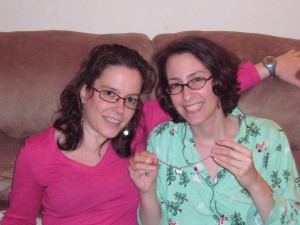 5 Responses to How I Met My Best Friend