September 11th: Through a Child’s Eyes

I started tearing up yesterday.  My friend, who had lost his father on September 11, 2001 on Flight 93, had put up a tribute to one of our classmates who had worked in one of the Twin Towers. Today I got up and I felt so upset.  But I have a little boy who is going to turn five tomorrow and who wouldn’t understand why his mommy might “lose it” today.  It seems every channel except Disney and The Cartoon Network is covering the anniversary.  Other than New York, New Jersey lost the most state citizens on 9-11, so we may have more coverage than where you are living.

My son was born September 12th, 2006.  My dad died September 13th, 2003.  On the fifth anniversary of September 11th, I was scheduled to be induced.  I remember being hesitant about the date.  I have to admit, I did not want to have a September 11th baby.  But my induction was scheduled for the evening, and I was just going to be receiving Cervidil, a mild drug to help me get ready for labor.  My Ob/Gyn told me it was very unlikely I would have the baby on September 11th. On that day I was still running around, even going to the baby furniture store because I still didn’t have my changing table.  I got stopped by a policeman for walking down a road that was closed due to construction.

“Can you PLEASE give me a break, I am going to have a baby today!  I have to get to the post office!  One look at my bulging stomach and he let me continue on my walk.

So on the fifth anniversary on September 11th, you could say my mind was on other things.

When Osama Bin Laden died this May, I let Tyler see some of the coverage.  I pulled out my September 11th tribute books.  We told him that Osama Bin Laden was like the worst villain that Spider-Man or Batman could ever face and that he had been killed.  Spider-Man and Batman do not kill the villains, but this man killed more people than any villain ever had.

And then I found out that “the experts” said that with children under six, you should avoid discussing Osama Bin Laden altogether.  Oh, well.

As we looked through my September 11th books with photos of the Twin Towers burning, collapsing, and all of the people covered in ashes, Tyler did not seem scared.  He did not cry.

“I am sad because the people died.”

“Did all the people love each other?”

“Well…I am sure he did help, I bet he saved an awful lot of people but what This Man did was so bad, he blew up buildings and three planes crashed, Spider-Man couldn’t save them all.”

“Yes, Spider-Man saw them and he saved as many people as he could, honey, it was just too much for him.”

“I want to get my Spider-Man.”

And discussion over, we watched a new episode of The Looney Tunes show.

Tyler never brought up Osama Bin Laden again.  And now…today.  I want to see some coverage, some memorials, but our family has only one television.  I want to cry and mourn, but how can I do that without upsetting Tyler, with his birthday being tomorrow, and us celebrating, believe it or not, my husband’s anniversary of getting his cat, Scotty on September 11, 1995.

Today is a hard day for any parent with young children.  I can’t even imagine the victims’ families explaining it to their children, why they are still crying, ten years later.  And all of them with young children who never knew their grandparents, their aunts, their uncles, their parents’ best friends.

My prayers are with every family member or friend who lost someone to the tragedy on September 11, 2001. 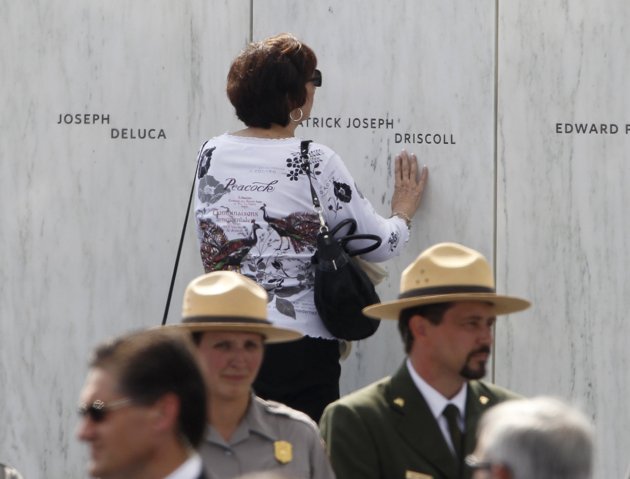 Shortly after the death of Osama Bin Laden, I interviewed Joe Driscoll’s son, Chris, about his feelings.  It was an article I am very proud of, one of the most important articles I have ever written and it can be read here.

3 Responses to September 11th: Through a Child’s Eyes