The Social Security Disability Doctors said it, some of my friends on Twitter are saying it, and my last psychiatrist was suspecting it; maybe I am indeed bipolar.  I thought the two extremes would have to come at the same time, and I have been depressed much longer than I have been manic, but after several months of being manic, in these last few weeks, I seem to be in more of a funk, more pessimistic than optimistic, more sad than happy, more dark side than light, with me still being able to see the light, but it being further away than the dark.  Perhaps it is from this darker side that I write this post.

You may remember that last month I went on the “ShutMyMouth” diet and some of you vowed to even do it with me.  After the first week of sticking to the diet I weighed myself and found that I had GAINED five pounds!!  It was then that I realized that this was more than a case of just overeating, something was wrong with me.  It wasn’t just the quick weight gain, there were a host of symptoms that I started to put together after that.  Actually most of my symptoms were the same, they were just MORE!  More tired than I ever have been, falling asleep talking, more confused, being half a block from my house and not recognizing where I was.  I also noticed that my voice was deeper.

Many people who are reading this are probably thinking I have some sort of thyroid disease and that’s what I was thinking too.  Indeed, I was a text book case for Hashimoto’s Thyroid, an Auto Immune Disease, which is actually one of the first AI Diseases to attack those who already have an AI Disease.

I went to my Primary Care Doctor who agreed that I most likely had Hashimoto’s, but to both our surprises, my lab work, while some results were on the edge of normal, were still in the normal range.  I took my symptoms and results to my wonderful Rheumatologist who all but tossed those results, saying I needed a full work-up and referred me to an Endocrinologist.

I had seen her about three years ago.  I had extreme Vitamin D deficiency and Osteopenia, the pre-cursor to Osteoporosis.  It was mainly for a two-time consult and I never saw her again.

As luck would have it, there was a cancellation and I called last Monday and got in to see her on Tuesday.  I was weighed and measured.  I now have Osteoporosis and have already lost an inch in height!  I have always wished to be petite, be careful what you wish for, I guess.  I came into the patient room in shock by my loss of height, in only a couple of years.

When the doctor came in I told her that we had met before although I am sure she would not remember me, which she didn’t.  “I’ve only gotten sicker with more diagnoses”, I said. “Don’t say that”, she laughed empathetically.  “Well it is true.”

She immediately latched on to my Osteoporosis, and wanted me to have another bone density test but insurance will only pay for one every two years and my last one was last year.  She was obsessed with my bone loss, you know it is bad when in the middle of your exam the doctor stops and says, “Let me call your Rheumatologist”, and then she leaves and dials a magic number where she is instantly put through to the doctor’s office that I have been calling all morning.  Can I have that number, please?  What are those secret numbers?!

Then she started to look at my family history which contains both thyroid issues and diabetes.  I had Gestational Diabetes with Tyler.  The belief is that if you have Gestational Diabetes, it is only a matter of time that you will get Type 2 Diabetes.  Diabetes, no offense to anyone here who has it, is one of those diseases that I feel I could not handle.  The eating restrictions, the blood sugar testing, the dangers of the disease.  One of my aunts is now blind because of it.  It contributed to my maternal grandfather’s death in his mid-60s.  She said that I was eating like a pre-diabetic, a life of sugar and caffeine.  But what else can one do when one has to stay up?  If you do something differently to stay up when you have to be awake, I would like to know about it, please!

During the middle of my examination she noted my swollen, blue-ish feet.  She touched them. “Raynaud’s?”, she asked and I said yes.

And then we got to my thyroid and hormones.  She wanted me to have full blood work for both and do that annoying 24-hour urine test collection where you have to give up a day of your life and stay home and capture all of your pee in a bottle.  She also wanted me to have an ultrasound of my thyroid to test for nodules.

During the entire exam I was thinking,”What am I doing here?  Why am I even bothering? So I can add to my more than a dozen diagnoses?  Am I merely prolonging a life when I am slowly dying?”

When you are chronically ill and in chronic pain and feel like chronic shit, you wonder these things.

I am one of the walking dead.

As I said in the beginning, I do see the “light” side, somewhere deep down.  I am living for Tyler and my husband needs me and so do my readers.  Some parts of life are still fun, but then my dark side says but is it worth how sick it makes you feel afterwards?

I am in the dark side right now, thinking When WILL I die?  Why do I keep doing this every day? Why do I keep on going, walk around looking like a mummy with so many joints bandaged, feeling so awful every single day?

I never realized that people would read me and count on me to be there for them, and sometimes I feel I always need to be the voice of reasoning and reassurance for them, the one who has been through it all and is now wiser.

Lately I have been feeling that I could use some one like that in my life. 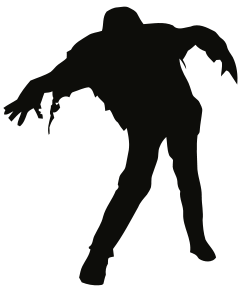 7 Responses to The Walking Dead