I read Exploiting My Baby as a member of the From Left to Write book club.  I was given a free copy as part of the book club.  This post was inspired by this book.

Exploiting My Baby by Teresa Strasser is a very…frank book about the author’s experience from conception to birth, and I happened to have loved it.

Thus, I have now been empowered, nay, liberated by Ms. Strasser to…

and I thank her for that.

I was 35 when my husband and I decided (after consulting a perinatologist, genetic counsellor, 18 viles of blood taken from me, and my husband fainting) to try to have a child.

We had waited a long time due to my health and when I was finally feeling pretty good I wanted this baby thing to work right away.  I charted my basal body temperature daily and peed on ovulation sticks.

The day was Saturday, December 17, 2005.  I knew we were coming close to baby-making time.  The phone rang and on my caller ID I saw that it was one of my aunts whom I had not spoken to in a long time.  As in long time, she was reaching out to me, trying to bridge the gap between our family long time, so I rushed to pick it up.

About five minutes into our conversation my husband came over and started to, you know, do things to me to make me want to get off of the phone.  But I didn’t want to get off the phone, this was a very important phone call and if I blew her off she would think that I was dissing her olive branch!  But it was close to baby-making time!

That’s right, I had sex with my husband while I was on the phone with my aunt.  I mean, wouldn’t anyone in my position(s) do the same thing?

I chatted on to my aunt during various maneuvers as my husband tried his best to be quiet (he’s used to this sort of thing from me) and I tried…not to sound like I was having sex.

We completed the act and I still talked to my aunt, for about an hour.  Not the sex, the conversation with my aunt.  Both went very well.

I wasn’t going to be one of those women who bought a million pregnancy tests and tested, like, the day after she had sex.  I waited until my chart showed that I was one day late and bought a test.  And sure enough, I was pregnant.

My husband was very disappointed as he had read about how wild and sexy (and desperate) baby-making sex could be on the side of the woman and he had really been looking forward to it.

But we had succeeded on the first try.  And so, I thank said aunt, for Grant might not have tried to be funny and get me off the phone if it were not for her.

Like Ms. Strasser, we too now have a beautiful son. 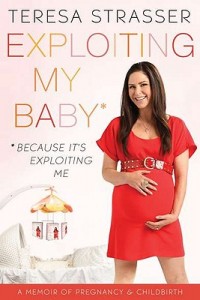 14 Responses to Exploiting My Baby’s Conception