Prompt: 2. Open a blank blog post and “right click paste” in the body of the post…what was pasted? Explain it.

I am really happy that this was my last cut and paste because it gives me a chance to write about a subject that is meaningful to me and one that Mama Kat’s fans can learn about as well!

As a person having invisible illnesses; diabetes, asthma and bipolar disease among them, the questions “But you don’t look sick?” or “How does it feel to be chronically ill?” came up often for me, even from some of my doctors until my diagnoses were made. I lost a lot of family and friends who just didn’t understand.

Then someone referred me to Christine’s website and her “Spoon Theory”. The theory is based on a true story developed by Christine when her best friend asked her what it was like to be sick. Basically it says that we all start our day with a certain number of spoons, but sick people use up their spoons more quickly than well people. For example, it might take a healthy person half a spoon to take a shower, but it may take a sick person three spoons. Many of us refer to ourselves as “Spoonies”.

“The Spoon Theory” has been read by thousands and seen throughout the world. The But You Don’t Look Sick’s ? Facebook page has over 130,000 likes on it.

If you know of someone with a chronic illness, or you have one, I encourage you to read “The Spoon Theory” and see Christine’s But You Don’t Look Sick’s website.

Personally “The Spoon Theory” helped saved my life and I owe Christine big time because of it! I’ve known her for over 14 years and I am pleased to say I knew her when she had a tiny blog with a little story! 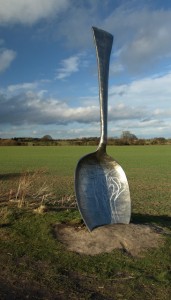