I had Gestational Diabetes and since things had gone very well with that, I was allowed to be induced in my 40th week.  I was still disappointed, because I did not want to be induced.  I did everything I could to get things moving but Tyler was staying put.  So on the night of September 11th, 2006 I checked into Robert Wood Johnson University Hospital in New Brunswick with my husband Grant and my doula, Dorothy Haines.  We had chosen a doula because Grant was not sure how much of the task he would be up to and the friend I wanted to be with me, Marie, had just had a child two months ago and we were not sure if she would be able to come.

The doctor gave me Cervidil to help soften my cervix and to hopefully put me into labor.  I had some cramping but no contractions.  Dorothy left and Grant and I went to sleep.

At 9:00 the next morning, I still had not progressed.  I was able to shower.  Dr. Kolawole Oyelese was internationally known as an expert in prenatal diagnosis and in OB critical care. Originally from Africa but schooled in London, his melodious voice talked to Grant and I as he explained that being an OB was not a job but a calling to him, and that he felt that his patients were more like his family.  Although I had only met him once before, I felt very happy that he was going to be delivering my baby!

He examined me around 11:10 a.m.  I was 2 centimeters but 80% effaced!  He told me he was going to break my water and start off with a low dose of pitocin.  At 11:15 I experienced my very first contraction!  Dorothy called my friend Marie and we decided she would get here around 2:00.

Right from the beginning, my contractions were 2 minutes apart!  I thought to myself This is the beginning of labor???? How am I going to stand the next ten or eleven hours???  Dorothy helped me try sitting on the birth ball and a rocking chair but I felt too much pressure.  I could only get some comfort by lying on my left side.  Grant and Dorothy were helping me get through my contractions and I was very proud that Grant had made it this far!

I remember saying to Dorothy, “This isn’t how you said it would be!”  Where were my weaker, more timed out contractions that would have perhaps gotten me used to all of this pain?

After an hour of this, the contractions got even more intense.  Before going in I had not made my mind up if I was going to have an epidural but at this point not only did I demand an epidural I would have taken heroin if it was offered to me…or maybe a gun?

Before my epidural the doctor said he wanted to examine me and I said, “No, please don’t touch me without an epidural, I beg you, I beg you!”  (Yes, I seriously said that!)  He relented and the anesthesiologist came in at 12:35 p.m.  You are supposed to stay still while they put the needdle  in place but by that time my body was no longer my own, the contractions were one on top of another! Grant left while I got the epidural.  He was never to get back in.

The epidural was working 13 minutes later and Dr. Oyelese examined me.  He said, “My God, you have gone from two centimeters to nine centimeters in less than two hours.  What he didn’t tell me at the time was that the nurse was having a hard time finding Tyler’s heartbeat and when she did it was slower than she liked.  The doctor said, “Elizabeth, I am going to help you have this baby right now!”

Nothing was set up in my room for the delivery.  A first time mom laboring this quickly was nearly unheard of.  I don’t know if he pushed a button or someone heard him but suddenly about a dozen people rushed into my room, throwing books, ice chips and other items everywhere.   My legs were up in the stirrups and I felt like I was watching a movie or something out of the t.v. show E.R.

When they strapped an oxygen mask on me, I knew something was wrong.  Grant heard me speaking through the oxygen mask and he saw the N.I.C. Unit bassinet brought in and he told me later he just started crying and praying.

Dr. Oyelese was very calm, assuring me that everything was fine.  With the epidural, I could no longer feel my contractions and it was difficult to push.  The doctor needed both the vacuum and forceps and he and the other nurses and interns said, “Elizabeth, you have to push, push as hard as you can!”  With their help I pushed for about six minutes.  The cord had been wrapped around Tyler’s neck.  I waited a tense few seconds and when I heard that cry I knew everything was okay. Tyler was born at 1:10 p.m.  Yes, if you are doing the math from start to finish that was two hours!

They cleaned him up and put him on my stomach.  I spoke to him the words I had spoken to him ever since I knew I was having a baby and knew I would name him Tyler.  I said, “Mommy loves, Tyler, mommy loves her baby.”  Dorothy said she could tell he recognized me instantly.

A lot of people think I am lucky that I only had a two hour labor, but I felt very traumatized over how quickly it all went.  I also suffered a third degree tear, fourth being the worst.  Tyler was born without a mark on him, I feel so thankful that Dr. Oyelese delivered him. Sometimes I wonder what might have happened if I had a less skilled doctor.  Afterwards, Grant told me he gave a little class on my delivery!  I have few regrets except that I wish I had done it before so I would have known what was going on and that I  had had a chance to enjoy the epidural for longer than a few minutes! 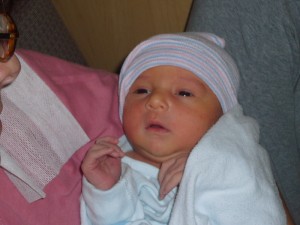