Mother’s Day weekend was kind of a mixed bag for me, of good, bad and ugly.

My mother is here visiting until tomorrow and we both attended Tyler’s school for the annual Mother’s Day “Muffins With Mom”.  We were the first to arrive to Tyler’s class and one of his teachers asked if either my mother or I would read a book to the class and the moms.  My mother had always wanted to be a children’s librarian so she gamely stepped up to read the book Love You Forever. If you know this book, you are thinking “oh no!”, if you do not, as I did not, you are thinking you are going to hear a beautiful story about the love between a mother and her son…which it was, until the mother DIES!  My mother was reading it and crying.  I was hysterical since it is my mother up there reading it and I have a disease that can be fatal, and most of the other moms were crying too. The kids didn’t understand why we were crying.

I was so pissed!  Who’s brilliant idea was that horrific book?!  I could think of a hundred others more appropriate! Still, the kids sang and signed a song for us and we did have some nice muffins, and Tyler had made sweet cards for my mother and I, plus a gift for me, which you can see in the picture below: 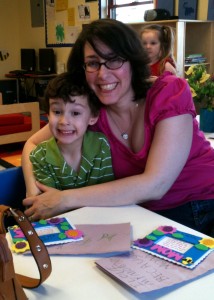 Was this before or after I bawled my eyes out?

On Saturday, my mother and I took Tyler to a Mothers’/Kids’ Day at one of our local farms. When I woke up my lips were swollen, chapped and stinging.  It seems that the lip gloss I wore to the Mother’s Day program to “glam” myself up a little had caused an allergic reaction.  Thank you, Lupus!  (I am still reacting to it four days later.) 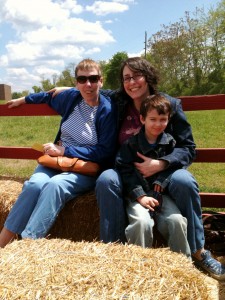 Mom, Tyler and I, before the back-breakingly rough hay ride starts.

As part of the “festivities”, there was to be a sheep-shearing demonstration.  I had heard many people say sheep-shearing is abusive, but I wanted to see for myself, and they were doing it in front of the kids, so how bad could it be?  I think my view of sheep-shearing now that I have witnessed one could be another post entirely.  Let’s just say that when I saw the 8 inch gaping wound on the sheep I said, “Okay!  Tyler, why don’t you go ride the ponies now?”

Tyler also rode a tricycle around an obstacle course made of hay.  At four-and-a-half-years of age, I am becoming concerned, because Tyler still does have a bit of trouble pedaling and steering, but again, perhaps another post.  It was even harder with him crashing into the hay. My mother and I took turns helping Tyler steer and pushing him along. 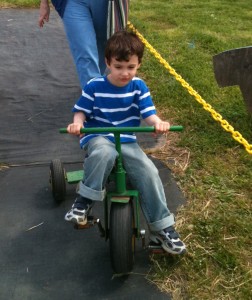 At this point, if you know me at all, you may be thinking, “Why Emily, aren’t you overdoing it a bit?”  Except Mama wasn’t thinking about that then.

Sunday dawned.  I got up before everyone to go to the bathroom and I screamed in pain.  My right elbow felt like I had broken it and my left didn’t feel too much better.  I could not open my non-child proof cap pain medicine (which I keep locked in a safe), nor my already opened bottle water.  I had to wake Grant up and then everyone got up.  Not much of a Mother’s Day for me, nothing from Grant, as I had asked him not to buy me anything, since we cannot afford it, including cards.  But besides the gift and card Tyler had given me on Friday, Grant told me Tyler had another present for me that he was very excited about. He came up to me and said, “Mommy, I want you to have this book.”  It was his own book, Gallop, that Grant had bought Tyler a couple of years ago from a museum.  Tyler had picked it out for me and told Grant that he had wanted to give it to me.

Tyler was following our lead.  Since Grant and I are so poor, if we give our loved ones gifts, it is usually a “re-gift”, something nice that we had when things were much better for us.  I thought it was so sweet that Tyler knew that he did not have any money either, so he had picked out one of his own things to give to me.

But as I said, I did have this horrendous elbow pain that I had never felt before.  I’m thinking, “Lupus, osteoporosis…I need to have this checked out.”  I knew it was from helping Tyler on the tricycle at the farm.  I called up one of those immediate care places.  There I was on Mother’s Day with my mother at the doctor’s office.  I was taken in quickly and diagnosed pretty quickly as well.  Lateral Epicondylitis, or the more common term, Tennis Elbow in both of my elbows.  One usually gets this from repetitive motion but because of my other diseases, I didn’t need much repeating.  The doctor said I had to be careful not to bend my elbows at a 90-degree angle or more, no lifting, pulling or pushing…and no computer!  You see how I am listening to that one?

My mother and I went to the pharmacy.  It was 12:30 and my brother and his wife are coming at 1:00 for Mother’s Day and my brother’s birthday.  Grant called me and told me that Tyler was sleeping in our living room.  What?!  He never naps this early!  My mother, brother, his wife and I all got to my apartment at the same time.  Tyler of course was still in his pajamas, I had not showered.  Grant tried to move Tyler to my bedroom but he woke up and now he was a complete grouch.  He hated everyone, and told them so.

My brother, his wife and my mother went to pick up food we had ordered from an Italian restaurant.  It was a lot of stuff and some of it was in a box on a chair in the kitchen.  Tyler walked by and by accident knocked the food onto the floor.  My dinner and my sister-in-law’s dinner are laying on the floor!  My head was spinning.  My mother and I looked at each other, and started just putting the dinners back on the plate.  I will probably get some rare infection from this.

Tyler got cheerier after eating his spaghetti with meat sauce and having birthday cake! Everyone decided to go for a walk, play mini-football and go to the playground.  Everyone except Grant and I, who got into bed, and slept.

So, no pictures of the actual Mother’s Day as I never showered and got back into my pajamas.

Like I said, the good, the bad and the ugly and at some points, the very sweet.