(After having just a precious 2 days with my beloved laptop, there is a problem with the new hard drive they put in, so once again, I must bring it to the shop!  I am writing this post on my husbands laptop.  His has a possessive/quote key that works about 25% of the time.  As he is a professional writer I do not know how he can stand this, but there it is.  I write this to let people know that my grammar and editing are much better than it would appear. Thank you.)

I was a strange type of kid.  I got called WEIRD, LESBIAN, FREAK, ALIEN, etc. in junior high school.  Except for some reason that I cant explain, it didnt really bother me.  I knew I was better than the kids who were making fun of me and I always had this This Too Will Pass kind of attitude.  Having a best friend name Jennifer who got called the same stuff made it a lot easier.  Jennifer and I were as close as two best friends could be and we didnt need to be friends with someone else who didnt want us in their clique.  This is not to say we had no other friends though.  Jennifer had some older friends, I had a boyfriend and my clique, if you could call it that, was of the brainy kind.

Youre weird, you know that? Thank you, I would say, infuriating the would-be bully.

The summer before we were going in to the eighth grade, Jennifer and I went to the Summer day camp through our township.  We hated to be spending a summer amongst THOSE people, but it was the only way if you wanted to be assured of getting a job as a Counsellor in Training next year, that you be a camper before eighth grade.

Camp was pretty fun, actually, with a lot of field trips to the Jersey Shore; the beaches and rides at Asbury Park , the water slides and the Haunted Mansion of Long Branch.  These are the field trips that really stick in my mind, because, besides the fun, they were a way to beat the heat!  If we didnt have a field trip like that, we were stuck in non-airconditioned classrooms or out on the field, playing soft ball or kick ball, my, ahem, favorites.  Jennifer and I were the types of kids who were always picked last for the teams.

When lunch came, you were pretty much on your own, after all, you were a whole 11 years old.  As long as you stayed on school grounds, you could eat anywhere.  Jennifer and I usually ate in the woods surrounding the school from the housing development, and afterwards we would go hiking.

Where do you aliens go for lunch?, the other kids would ask us, since no one dared go into the woods, but we liked them very much.  So peaceful, so much time just to talk and a break from the dunderheads we were going to camp with.

One day it was extremely hot.  We ate quickly and sat by a brook.  I cant stand this, I said, I cant survive in this heat!

I dont remember whose idea it was, Jennifers or Is, but we had about 45 minutes left of lunch period, and so we decided to leave school grounds, in search of a house with a pool! We scratched and scraped our way through the woods until we were in the development and began to explore.  A few minutes later we heard kids laughter and splashing.  It was like an oasis in the desert!  A couple of moms were watching their young kids playing in the pool. We had our camp shirts on, opened up the fence and told the mothers that we were so hot and asked if we could use their pool just for a few minutes.  They were surprised but they said yes.

Jennifer and I had a blast and we even played with the little kids in the pool!  I think the hostess even gave us some snacks and drinks!  Finally it was time to go back to camp.  Mind you, we had gone swimming in our t-shirts and shorts so when we arrived back to camp we were soaking wet.  The other campers noticed that what looked like profuse sweating was actually a couple of cooled off weirdos.

How, how did you get so wet?, they asked.

Oh, I said.  Well, you know how you guys are always calling us Space Aliens?  Well, we are and we just built our own pool and went swimming.

The kids took a step back from us.  They were so stupid and so inside the box, live and die by the rules, it didnt even occur to them that we could have left school grounds and FOUND a pool!

From then on, the Space Alien taunt pretty much disappeared from their unimaginative list of names that they called us.

Because you wouldnt want to cross a Space Alien now would you?  Bwah, ha, ha, ha, ha! 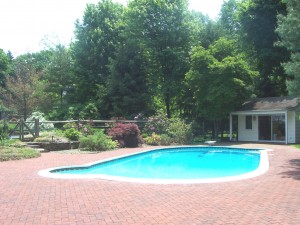