Tuesdays With Tyler: When Girls Attack!

Ever since Tyler has been in kindergarten he has told me he has not liked a fellow student I will call “Drizella”. This is unusual because Tyler has been in love with ladies big and small ever since he saw women in bikinis on the beach…at not yet two!  How embarrassing to have one’s baby boy starring at women with his mouth dropped open.

This weekend Tyler told Grant that Drizela has been beating him up on the playground.  They chase each other around and then when Drizela catches him she pounds him.  Tyler had mentioned this to whomever the adult on the playground is and he said Drizela would stop for a while and then go back to doing it.  It got to be where Tyler was afraid to go out on the playground.

It is an interesting situation when one’s five-year-old boy is being beaten up by a five-year-old girl.  I have always taught Tyler that you never hit, but that you especially never hit a woman or little girl.

Over at my aunt’s July 4th party this past summer, Tyler was playing with my cousin’s three-year-old and took one of those mini footballs and bopped her on the head.  She just looked up with him with her innocent baby blues and I couldn’t get over there fast enough.  My cousins must have thought I was crazy.  “Tyler, you never, never hit a little girl, NEVER, especially your cousin who is younger than you, and especially because she is a little girl!”

My cousin’s wife said, “Oh, that’s okay, it was no big deal.  ‘Amelia’ is an equal opportunity hitter.”  “You have two daughters and I have one son”, I told her, “I want to teach my son from the beginning that you never hit a woman and it starts with never hitting little girls.”  I made Tyler apologize to his cousin.

So now my son is on the receiving end of a tough little girl’s blows.  It’s not exactly something you let two kids settle on the play ground by themselves, and some may say even if it was a boy hitting Tyler, the issue should be raised.

New Jersey has one of the strongest antibullying laws in the country which just went into effect this school year. So we have decided to go through proper channels and have made an official complaint against the little girl.

I still don’t want my son hitting a girl, but I also don’t want anyone hitting my son.  I want Tyler to know that he can always come to us when he feels bullied, even if it is by a five year old little girl. 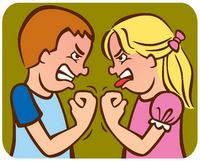 One Response to Tuesdays With Tyler: When Girls Attack!