Dropping Back Into Life

Let me start off by saying how sorry I am to have made you worry.  I received so many emails, tweets and comments on my blog from concerned readers.  After eight months, I finally feel ready to talk again.

It takes a lot of things to make a person drop out of life for so long.

Back in January I became dangerously depressed.  Being turned down for disability in December, along with non-stop pain and dry mouth from my meds and another diagnosis, this one requiring a procedure, fighting for food stamps, again…I felt like I just couldn’t do it any more.  Blog-wise, not realizing that this was part of my depression, I felt uninspired.  The ideas had always flowed so freely and now there didn’t seem to be anything to write about, or I would run out of things to say and the posts would stay in the “drafts” section.  I would stare at the weekly writing prompts on Mama Kat’s and nothing would appeal to me, I just couldn’t relate to any of the suggested topics.

I was at times depressed to the point of near catatonia.  I also felt as thought I had Alzheimer’s.  I couldn’t remember how to shop for groceries or how to cook.

I also became agoraphobic and had much difficulty leaving the house.

I felt like I could not take care of Tyler.

Everyone around me, including my therapist, thought I needed a break.  That I was too stressed out from everything going on and would benefit from having a kind of vacation in my home.

I began thinking that Tyler deserved a better mother.  He was only five, he would forget me, and be better off without me.  Any mother would be better than me.

I decided to go in-patient and while this may work for many people it did not work for me.  The therapy was not helping and neither were the new drugs.  I realized some people had been in the hospital for weeks and even months, and I knew if I did not show improvement they would not let me go.  I took the advice of a patient who had been “inside” many times and I said what I had to say to get out.  I went straight into out-patient three days a week and found no help there either.  I asked for a change of meds as it had now been six weeks and I was not improving.

Throughout Tyler’s life, Grant and I had been able to take care of Tyler.  When one was very ill the other would pick up the slack.

For the first time, we both found ourselves very sick.

We had no family in the area and had to make a quick and hard decision.

Grant and I split up.  There was no room for all three of us at my mother’s or Grant’s parents’ house, so Tyler came to live with me at my mother and stepfather’s in Massachusetts and Grant went to live with his parents in Ohio.

I realize now how wrong this was, that we should have done anything we could have to keep our family together, but at the time I could see no other way.

We do plan on reuniting with all three of us living on our own in OH.  The cost of living is much cheaper and we would be near Grant’s parents.

Tyler has not adjusted well and he remains brokenhearted about being away from Grant.  I am hoping he does a little better when he starts school on Wednesday but nothing will take the place of his daddy or the three of us being together again.

When I got here in March, I became even worse.  I could not even begin to get help.

I sunk even lower into  my depression and I began having delusions.  I also became very disengaged and did not feel love for my son.  I would look at other mothers and wonder why I couldn’t love my child the way they could.  What had happened to Super Mommy? I had to force myself to say I love you, show him affection, read to him, etc.

I have researched Lupus and Mental Illness, and found such diagnoses as Lupus Psychosis and Lupus With CNS Involvement could be the cause of my symptoms.  I need to see a Neurologist.  It has been such a long time since I have taken care of myself.

Tyler and I went to OH to visit Grant in mid/early August and after that I finally started to come out of my depression.  I felt more hopeful and I finally sought therapy and medication.

Disability-wise, an upper court found fault with my judge’s decision and my case is going to be reconsidered on October 5th, most likely by the same horrific judge.  I have lost nearly everything due to being sick, perhaps this will finally be enough for her.

Getting my disability would go a long way in getting us all back together sooner.

I hope to start writing again on a regular basis and I again thank you for your concerns and your loyalty to Mama Sick.  I hope you can understand that I just could not respond and did not even communicate with most of my IRL family and friends, and still have not with most of them.

I never imagined one could get that depressed. 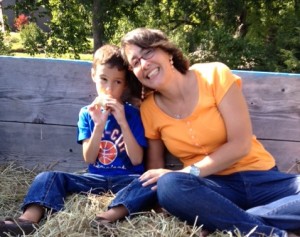 5 Responses to Dropping Back Into Life