Prompt 2. The last movie you saw in a theater.

I don’t see a lot of movies in the theater, it’s just too expensive and I can wait until they come out on Netflix.

The only movies I do like to see in the theater are the action ones which are really enhanced by the big screen effect. Hearing the audience scream and feeling the vibe in the theater complete the experience.

Except, when I finally coordinate my life to see the movie there are usually six people there if I’m lucky.

Twice I’ve seen 3D movies in 2D. Apparently in a crowded summer movie season, they take the 3D movie off the marquee very quickly and I must see the movies without the 3D effect.

I saw the Amazing Spider-Man 2 in 2D and I really liked it. The story and the action were great. While seeing it in 3D would have made it more exciting and fun, the movie definitely didn’t need it.

A couple of weeks ago I saw Godzilla in 2D. That movie really needed the extra D. Without it, the movie was a totally serious movie about Godzilla attacking our shores. Without the D you had to concentrate on the story, some of which didn’t add up.

SPOILER ALERT, sort of. Who hasn’t seen Godzilla by now?

The hero must defuse a bomb, supposedly so powerful that massive death and destruction would ensue if he failed. To me, it seemed like that part of the story was dropped. What happened to that deadly bomb?

I was confused and upset.

“Excuse me”, I asked a couple leaving the theater. “Can I ask you a question about the movie?”

They said I could.

“What happened to that bomb, the guy was supposed to defuse it but I feel like that plot line was dropped.”

“Oh no, it exploded. Remember when they show the white light with him on the boat and then he is rescued?”

“But I thought that bomb was supposed to destroy everything. How did he live?”

They shrugged and said, “It’s the movies.”

I left angry, with my intelligence insulted.

I really do enjoy the Godzilla series, so when Godzilla 2 or whatever they’re calling it comes out I plan to be getting my 3D on with the rest of America. 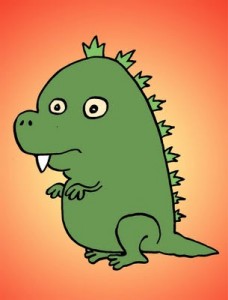 3 Responses to Godzilla in 2D?