If you had made a career out of whatever you were passionate about when you ten…what would you be doing?

These were the years when it was every little girl’s dream to be in the musical Annie on Broadway. You may know a certain actress, Sara Jessica Parker, who liked her sex in the city? She was the most famous “Annie” to come out of the Broadway musical.  You couldn’t call yourself a singer if you didn’t know every word to every song in that musical.  I grew up singing “Tomorrow”, “It’s a Hard Knock Life” and “Maybe”.

Every so often they would hold open casting calls for potential Annies and her orphan friends in New York City.  I lived in New Jersey and I begged, begged my parents to let me audition. But my parents didn’t think it was proper for little girls to be in show business.

And so, whenever I would do a talent show or a recital I had to accept my standing ovations in New Jersey…to people who told me I should try out for Annie.  I used to sing at my cousins’ weddings, traveled with my record player/microphone to sing for my extended family, and sing wherever there was a piano and someone willing to play.  You might say my life was a musical, you know, how people just suddenly burst into song?

I started taking voice lessons when I was about 11 as well as acting lessons.  Even though my parents weren’t going to let me try out for Annie, these are the things I wanted to do and kept doing them.  I sung in two choirs in high school and acted in high school as well.  Yes, I was a choir and drama geek!

I even went to a Performing Arts High School in my senior year and it was there I realized…I didn’t want to become a (starving) actress.  There were just too many talented people and only a lucky few made it.  I didn’t want to do the “I’m an actress (but I’m really a waitress “) bit for the next ten years of my life.  I knew I didn’t want to major in Acting or Singing in college.

That didn’t stop me from doing those things, though.  My choir in college went to Rome, and sang at Carnegie Hall, and I did sixteen plays in my four years there.  My first career after college was being an on-air personality and I prided myself that I was able to (barely) support myself using my talent.

To this day I still do voice-over work.  I’m one of those annoying recorded people on the phone you hear when you are trying desperately to get a live person.

And these days you will find me still singing, except now it’s just for my son.  And at four years of age, I now have a singing buddy and a child who enjoys acting out scenes from The Backyardigans, the Spider-Man movies and playing Snoopy, the World War I flying ace.

But every so often, a part of me still thinks…if only they had let me audition for Annie! 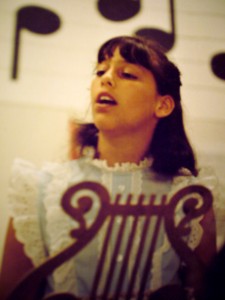