Flannery O’Connor: A Woman With Lupus Who Accomplished Great Things

It is thanks to the comedian Norm MacDonald and his twitter bookclub @normsbookclub, that I for the past few months have been expanding my mind and reading things I would have never read before if it wasn’t for Norm and his book club.  Unlike most book clubs, Norm’s is unique in that the club mostly reads classical literature. Being a part of the club has “forced me” to re-read and like and understand the behemoth Moby Dick, which I hated when I read it sophomore year in high school.  I have also been exposed to Percy Walker’s 1961 American classic The Moviegoer  and will read The Good Earth by Pearl S. Buck for our December 23rd discussion.  I am grateful to the book club and it’s members in that I never would have sought out these books were it not for my respect for Norm MacDonald (@NormMacDonald) who is also a fine writer which I learned when I started to follow @NormsStories.

This month we read the novel Wise Blood by Mary Flannery O’Connor.  I had to get the Collected Works by O’Connor since my library did not have Wise Blood in any other form, so besides reading the assigned book I also read “A Good Man is Hard to Find” and “The Life You Save May Be Your Own”, among other stories.

I was curious to know about Flannery O’Connor’s background, perhaps more curious than the other writers since this was the first women author we had read.  She is described as an American novelist and short story writer, a Southern writer who wrote in the Southern Gothic style and examined morality, ethics and her own Roman Catholic faith.

In 1937 her father was diagnosed with Systemic Lupus Erythematosus, or the most common form of Lupus and the one that I have.  He died in 1941 when O’Connor was a teenager and she was devastated by the loss.

At 26 years old, O’Connor herself was also diagnosed with Lupus.  Expected to live only five years after receiving the diagnosis, she lived for 14 years and died at age 39 from complications of the disease in 1964.

What inspired me most about Flannery O’Connor was that it was during this time between her diagnosis and her death where she wrote all her great works, more than two dozen short stories, two novels and 100 book reviews.

It shows to me that a diagnosis of Lupus, even back in the 1950s, does not mean an immediate death sentence. Although O’Connor did have to return to her home because of the disease, she did not give up her dream of making an impact and succeeded in becoming an important voice in American literature.

As I lay here in this bed, frustrated by my exhaustion after two days of Thanksgiving Day festivities, I think “What can I accomplish in the time I have left here?”  Mary did not have a laptop and she certainly did not have the luxury of typing in her comfortable bed.  She was able to be so prolific, despite the pain and fatigue of Lupus, without little more than steroids to treat her disease back then.

Mary Flannery O’Connor not only inspires me to keep writing this blog but perhaps the novels or other ideas that I have rumbling around in my brain.

There is still time for me to make an impact in the disability/invisible illness community and there is still time for you as well to make an impact on whatever it is that you are wanting to do with your life too.  No one knows how long any of us has to live, whether or not we currently have a disease and the lesson here is that time is precious for us all, and it should not be wasted on “Maybe I will start that blog”, “Maybe I will write that book”, or “Maybe I will take that art class.”

The time to do it is now.

And do it and do it until you can do it no longer.  Mary Flannery O’Connor has inspired me to keep going, and to keep writing, perhaps until the day I die. 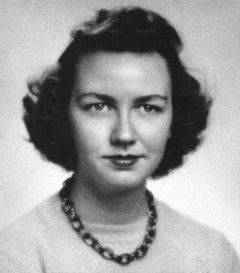 5 Responses to Flannery O’Connor: A Woman With Lupus Who Accomplished Great Things