When we first moved to Massachusetts in March, Tyler was five and a half and I couldn’t begin to wrap my mind on a birthday party for him in September, with none of his friends and his daddy not being able to come.

Tyler also had his heart set on one of those bouncy places and there are none around where we live so I knew we would have to travel some distance. Tyler has only made a few friends too.

Tyler has had such an upheaval this year, I really wanted him to have something special and normal.

Three boys came, two whom we have met here and one good friend who’s mother drove him from New Jersey.  We sort of had the party on the sly since we only had a few kids.  No party room with outrageous fee needed! 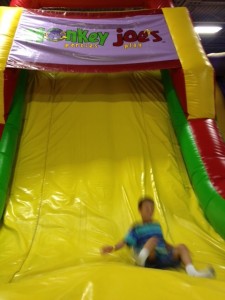 Okay, this is a lousy shot, but all of my “action” shots pretty much came out blurry. I had to show you that the kid did have some fun, so bear with me here. 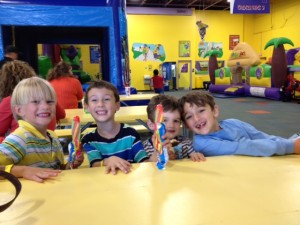 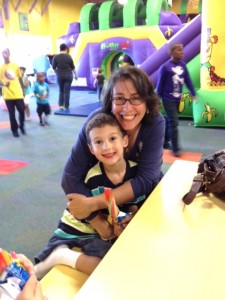 This party was such a victory for me because up until about a month ago, I would not have been able to even attend a birthday party, much less host one for my son.

By the way, you can look at Tyler’s fifth birthday party here.