After having increasingly worse vaginal pain, I went to my primary care practice on Thursday.  Since I have only just started taking care of my health again in August, I don’t have a gynecologist.  I was seen by an intern, who had to call in the doctor.  So I had two strange men peering into my vagina.  They found nothing wrong with me, although they did believe I was in great pain.

And then, I felt like an idiot, but party because my memory is so poor and partly because I had blocked it out, I said, “Oh yeah, in January I was diagnosed with Interstitial Cystitis.”

I.C. is a chronic, long-term inflammation of the bladder wall and is associated with other conditions I have such as Lupus, Fibromyalgia and Ulcerative Colitis.

The diagnosis of Interstitial Cystitis was the last straw for me back in January.  I was in excruciating, non-stop pain causing me to be unable to sleep for three to four days.  The urogynecologist wanted to do a procedure on me in the hospital, the diet he gave to me was ridiculously strict; no coffee, no spicy foods, almost all fruits, and yogurt, even things that are known to be good for you were off-limits on this diet.

The depression from being turned down for disability, pain from extremely dry mouth, having to apply for food stamps, again, and now this diagnosis, was severe enough to make me go in-patient.

I ignored my I.C. diagnosis and I eventually went into remission.  Until about a month ago.  I tried treating it with an over-the-counter medication for yeast infections which helped for a little bit and was relieved a bit by my period.

Which brings me back to Thursday when I couldn’t take it any more.

I can definitely relate it to a dietary change.  I had made chili and I put the chili powder in my bowl only since I am the only one who likes spicy food.  I put in a lot.

My doctor is asking for my records from my urogynecologist in New Jersey and will try to connect me with one here.  I see him again in two weeks.

I am swallowing ibuprofen like candy.  Wearing jeans is horrific.  It just hurts all of the time.

I am going to call him tomorrow and say I need something stronger for the pain, a quicker appointment, something!

Grant is afraid that this bout with I.C. will put me into the same frame of mind that it did the first time, but I was very depressed before I even got the diagnosis.  Yes, I.C. is a very difficult disease to deal with but I feel more rational about it now.  I know the diet is vastly different than the way I like to eat, but if it will stop the pain I am all for it.  And maybe it will turn out that it is only one or two foods that bother me and not the entire list. 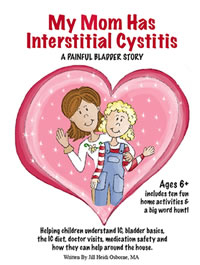