A few days ago I read a post by Nancy on her blog One Stop Boy Shop lamenting that she was not able to eulogize her father at his funeral many years ago.  I think it is extremely admirable that one can pull themselves together enough to be able to speak at their parent’s or sibling’s funeral, but I certainly could not do it either.

But Nancy did give me the inspiration to do one here, right now, although my father died almost six years ago.

My father had me when he was forty-seven years old, and I was his first of two children. Although this is more common now, nearly my whole life I was mistaken for his grandchild, and my mother, twenty-one years my father’s junior, was often mistaken for his daughter!

It was merely amusing to me most of my life because I had the greatest father a child could have.  I think having me late in life made my father a very selfless parent.  He was extremely hands-on in his parenting, which was still pretty rare back in 1969.  I have memories of him when I could not speak yet, making funny faces at me.  I remember sometimes not being able to sleep, or my brother and I crawling into my parents’ bed while they were still up.  My mother, complaining as she had stayed at home with us (I can’t blame her), and my father, protesting, “But I haven’t seen them all day”.

My dad would give me the last piece of pie, the last cookie…If only one of us could do something, I would do it, or he would always give me the extra turn.  He had the patience of a saint as he would help me pick out which same doll out of a dozen was the best, and later, would walk around the mall with me, letting me try on as many dresses as I wanted.

He had a great dry sense of humor, loved politics, history and baseball (the Yankees).

My father battled with prostate cancer twice in his life, once when I was in college, and then ten years later.  I was so grateful he was able to walk me down the aisle and have so many regrets that I did not give him a grandchild while he was still alive .

For a time we battled our sicknesses together.  He his cancer, and I my Rheumatoid Arthritis. The whole time he was sick, when he was far sicker than me, he never stopped asking how I was doing, how my pain was.

At my dad’s funeral, one of my cousin’s threw in Good & Plenty candies.  She told me that he always used to bring her the candy every time he took her out.  I realized then that my father, not having had children of his own for so long, was a great uncle to many of my cousins who were older than me.  I envied them their own special memories, and that they had known his so much longer than I had.

My father’s name is not a name you would know, but those whose lives he touched were made better by knowing him.  And I am blessed to call him my daddy.  I still feel our close relationship even though he has passed on, and when the time comes, look forward to being able to hug him again, and maybe even put nail polish on his nails as I did when I was a tween and couldn’t decide which color I wanted, for old time’s sake. 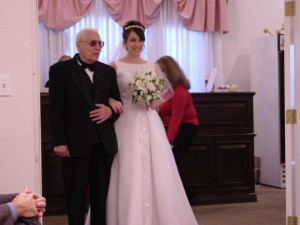 4 Responses to For My Father