How was your Christmas? Mine was a mix of good and bad. Besides my chronic challenges I had a miserable cold and had somehow managed to strain my back. I was in a lot of pain, and walking, even sitting, was absolute agony.

If it wasn’t for Jacques, I think Christmas would have been quite bleak. He did absolutely everything; cooked, shopped, wrapped gifts, all while I just laid in bed or managed to make it over to the couch.

We got the tree up on the 23rd, the latest I have ever put up a tree and that day Jacques was still buying lights of which were slim to none. He first came home with lights with white wiring that would not do for a green Christmas tree. He was able to return them and got white lights the color that makes me think I am living in an office they are so bright white. 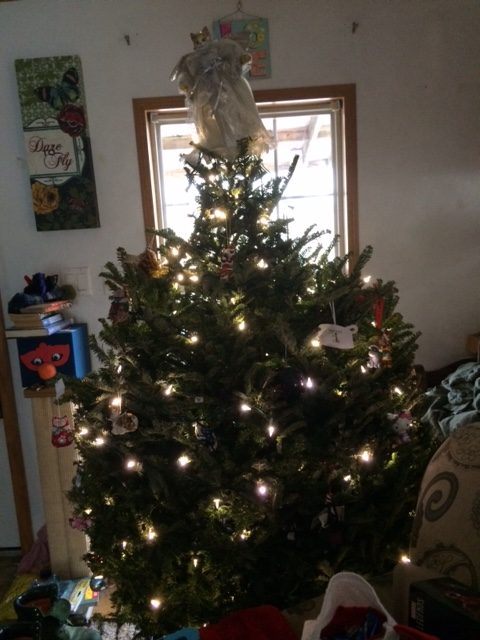 I need sunglasses for this tree!

I did add five new ornaments this year to my all cat-themed Christmas tree, one of which was this Caribbean pink kitty: 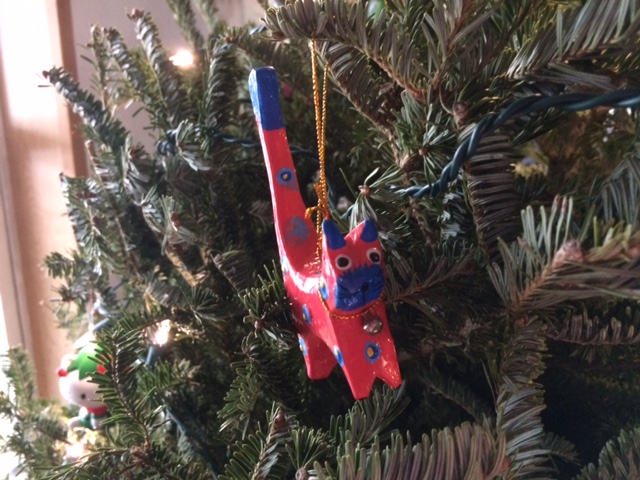 And there’s always my all cat Nativity scene: 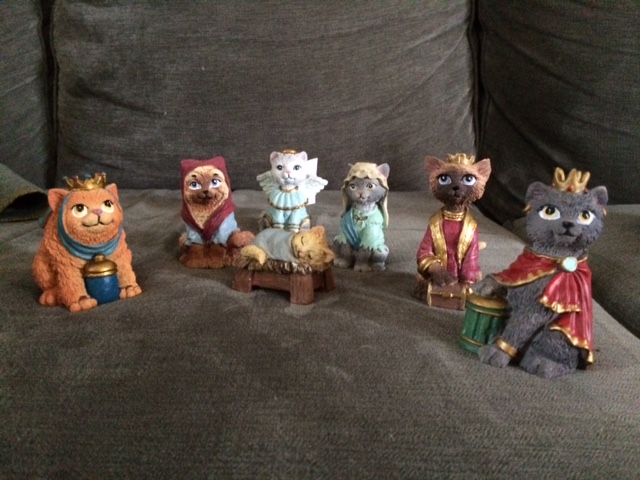 I don’t know what was wrong with the mail this year but three of Tyler’s gifts didn’t come and he told us it was a great Christmas anyway. I’m so proud of him!

I’ll end with a picture of him putting the cat angel on the tree. No pictures of myself to put up here as I wasn’t wearing a bra on Christmas morning and it showed. 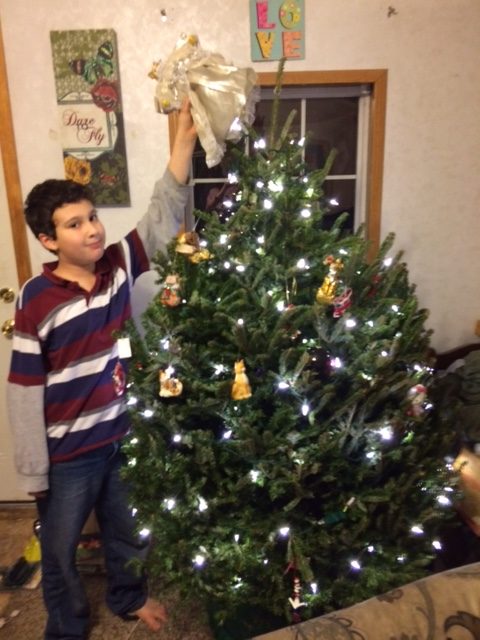 Hope your Christmas was a Merry one!

It’s never too early to start thinking about the kids for next Christmas! Check out this gift guide by My Kid Needs That.

A lot of mothers with chronic illness have enormous feelings of guilt that they cannot be “Super Mommy”. That instead of doing things with their children they have to nap. That they often end up just watching their children instead of participating with them.

In the days before Mother’s Day I wondered, “Is the way I parent my child worth celebrating?”

It doesn’t help that I am going through another depressive episode. It’s not the worse one I’ve ever been in but it is taking it’s toll on my daily activities and thought processes.

In my state I often wonder what to do with Tyler. It is difficult doing things with him so I have been taking him to the park. It gives me a chance to rest and watch Tyler play. Sometimes I talk to the other parents and grandparents there and it makes me feel even more inadequate than I already feel.

Yesterday Tyler was excited to give me his Mother’s Day gifts he made at school. 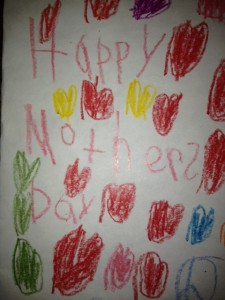 The inside of the card read: 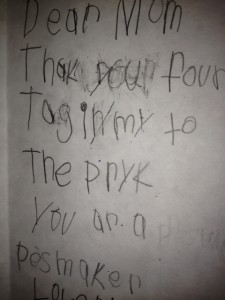 In case you are not fluent in a kindergartener’s writing it says, “Dear Mom, Thank you for taking me to the park. You are a peacemaker. Love, Tyler”

I think this can be a wake-up call for us all. Maybe our worst is not so bad. Maybe we are doing better than we think.

Maybe our children love us just the way we are. 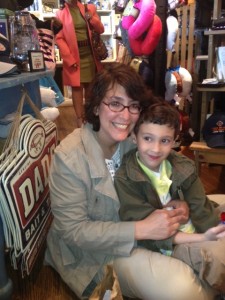 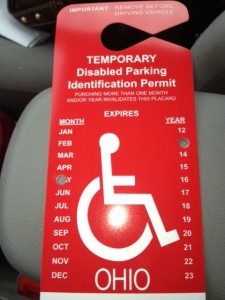 Prompt 1)  Have you decorated your Christmas tree?  Share a favorite Christmas ornament.

I always feel a week behind during Christmastime!  My mother is coming in next week and we plan to get our Christmas tree next weekend, so no, no tree up yet.  As for the ornaments, they are all ready to go.  Some of you may know from last year that we decorate our tree with all cat related ornaments.  I’m not sure when I started doing that or why, it just happened that way.  And since our cats are the way we met, it just seemed the right thing to do!

I have so many “favorite” ornaments, I couldn’t share just one! 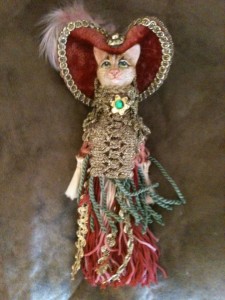 We got this very fashionable kitty in Las Vegas on our honeymoon in November of 2002, along with another similar themed kitty ornament.  I remember the two were over $30 each, buy hey, we were on our honeymoon, and I was gambling and winning! 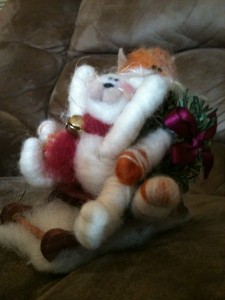 For my 35th birthday, Grant surprised me with a Christmas trip to the beautiful seaside town of Cape May, NJ. We stayed in a cozy bed and breakfast and of course couldn’t help but buy a couple of cat-related goodies for our tree!  We bought these two kitties on their sled at a shop that specialized in dog and cat gifts. 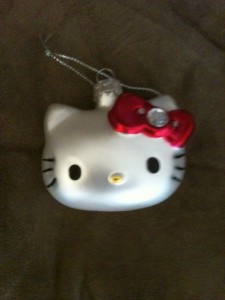 This ornament is new this year.  Who doesn’t love Hello Kitty?  The reason I chose it as one of my favorites is because this year Grant got his disability.  We overcame a big hurdle in our lives and have a little bit of money so that I could finally afford to buy something new for our tree.  Literally I had not bought any ornaments in a few years so this represents a hopeful start for us.

Whatever you are doing this holiday season, I hope you are filling it with old memories and memories to come!

This is the third time I am pleased to be working with the fine women from Fashion to Figure, a site that carries very trendy and fashionable clothes for the plus size woman at great prices!

Wouldn’t it be nice to have something new to wear to jazz up your holidays?  Fashion to Figure will give one lucky winner the chance to choose anything she wants for up to $30.00.

And here are some of the things the winner could choose: 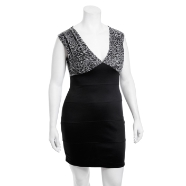 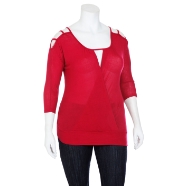 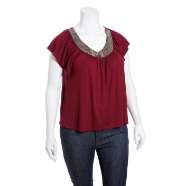 This dress and these tops are all either $30 and under!  Fashion to Figure has great clothes at great prices, with sizes from 12-26!

There are three ways to enter:

3. link it on your Face Book page

Each entry counts as ONE so if you do all three, please comment THREE times.

Congratulations going out to Stacey Gamberg, winner of my contest for up to $30 worth of holiday fashion!  Stacey’s entry, #4 was selected by random.org.

Even if you didn’t win, make sure you take a look at Fashion to Figure’s  amazing website and take advantage of their holiday sales.  Treat yourself, you deserve it! Thank you to all who entered!