Too Close to Home Yet Inspiring

This book was given to me at no cost as a member of the From Left to Write book club.

When I first began reading the memoir If You Knew Suzy by Katherine Rosman, I didn’t know if I would be able to get through it.  The events, times, and dates were too close; I had lost my father to cancer, the author and I were close in age, and my father also never got to see his grandchild.  I had lost my father in September of 2003, but even after all these years, living it again through the eyes of Katie Rosman brought the memories back of my dad’s death.  The horror that it is to watch a parent die of cancer and the toll it takes on the child.

My father and I were very close, we saw life the same way and shared a similar sense of humor.  A “late bloomer”, my father did not marry until he was 46-years-old and had me when he was 47.  He had six brothers and sisters and he was the last sibling to have children.

My father had few close friends, unlike Suzy, as I think it is the case with most men of a certain age. His world mostly existed of his family, reading the newspaper and books about history, and watching CNN and the Yankees.

Unlike Suzy, my father seemed resigned that the prostate cancer would kill him the second time around, ten years after he had beaten it the first time, although he did try radiation and chemo. Looking back, it seemed to make his quality of life in that last year far worse than if he had chosen nothing at all.

If he was afraid to die, he never expressed that to my mother, brother or I.  You could say that might be a trait of men, not wanting to share their emotions, but my father, in particular, preferred to “suffer in silence”, whether it be a cold or cancer.

On the day of his death my husband and I had planned a regular Saturday visit.  One of the hospice nurses came to me.  “I’m glad you are here, I had left you a message.”  My father had fallen into a coma that he was not going to come out of and they predicted only a few hours left for him.  I had arrived before the rest of my family.  “What’s that machine running?” “That’s not a machine it’s the death rattle,” she replied.  “Your father’s got one foot in this life and one foot in the next.  You need to tell him that it’s okay to let go.”

And so I did.  I told him that we would all take care of each other, he didn’t have to worry any more and that he should go and see his mother and father and brother and sister again.

We were all there when my father died.  And then, after the initial shock, my mother said we needed to eat so she took us out for a late lunch.  It was one weird lunch.

At my father’s funeral, as we all put roses in his grave, one of my cousins threw in the candy Good & Plenty.  “Your dad used to bring me these all the time when he would take my sister and I out.”  And it occurred to me that my dad had lived almost a whole lifetime before I came along.  He was the fun uncle and he enjoyed going out with all his nieces and nephews.

There are so many things that I don’t know about my dad from my family and this book has inspired me to get in touch with them and ask them for a memory or story about him before I was born.  It will make a nice piece for next Father’s Day and I thank Katie for giving me the idea. 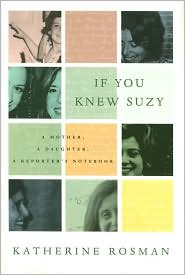 6 Responses to Too Close to Home Yet Inspiring