Tuesdays With Tyler: To the Beach or Bust Part 2

So, we did it and I lived to tell the tale!  Tyler woke up around 6:45 on Saturday morning and when I told him we were going to the beach he started crying and saying he didn’t want to go. Weekend mornings are Tyler, Daddy and television time and the two of them look forward to it.  Part (okay, most) of me wanted to just say “Okay, we don’t have to go if you don’t want to” and drag myself back to bed but Tyler hasn’t been to the beach enough to know how wonderful and fun it is.  I told him we weren’t going right now so he could watch some t.v. with Grant and that seemed to satisfy him.

We got on the road at around 9 a.m.  Normally, I am bothered by my mother’s non-stop need to chatter but this morning I needed it to keep me awake.  At one point we heard from the backseat, “Guys, calm down”.

When we got there at 10:00, the beach was already  pretty crowded and all the handicapped parking spaces were gone.  Ocean Grove does have a free parking lot so we got a space there. My first worry had come true, the long walk to the beach with our stuff.  We made camp and unfortunately the ocean was very rough along with high tide coming in.  Tyler seems to fear all bodies of water besides the bathtub and this was a day it was even hard to walk along the shore line.  That disappointed me because I had this image of me walking along with my son with the water just tickling out feet.

But his desire to make a sandcastle was strong enough that I convinced him to go close enough to where the sand was wet.  We were digging, sitting on a towel when out of nowhere a wave came and knocked Tyler and I down flat.  People started running to move their beach stuff.  I grabbed for Tyler and pulled him up.  He was wet up to his neck, frightened and crying.  As if he didn’t fear the water enough!  My mother and I kept telling him he was okay but that did it for being anywhere by the water for the rest of the day.

We went back up to where our stuff was and Tyler was satisfied enough to make sandcastles from the water that had flooded his bucket and that my mother brought back to us.  We put little shells and parts of shells and seaweed to decorate his architectural masterpiece.  At this point I am pretty well spent, already.  My joints were hurting wherever the sun hit them even though I tried to stay under the umbrella.  My hips hurt too much to lay down.  I felt sad that it had to be like this.  Sad that my illnesses always color my good times with Tyler.   But Tyler did say that he was having a great time so that helped.

I didn’t perk up much after lunch so Tyler and my mom took a walk on the boardwalk. Conversations heard and weird stuff:  “Let’s go have a cigarette while we put more sunblock on the baby”.  And a woman with a tattoo that looked like she had a garden growing out of her vagina.  Ewwwww!

When Tyler and my mother returned, thinking of our long trek back to the car I told her it was time to go.  We had been there three hours.  My mother balked, she’s a real beach goer, but I said, “Mom, I am in p-a-i-n”.  Shortly after getting on the road I stopped at Dunkin Donuts to get an iced caramel latte so the sugar and caffeine could power me home.  Tyler fell asleep immediately.

Despite the pain and exhaustion I am glad I did it for Tyler.  He’s what it’s all about. 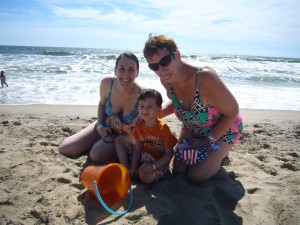 My mother, Tyler and I before the wave from Hell! 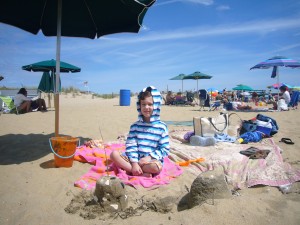 Tyler showing off his first sandcastle! 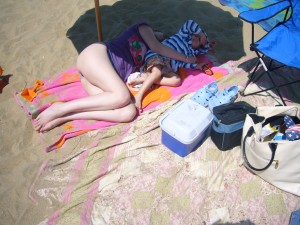 5 Responses to Tuesdays With Tyler: To the Beach or Bust Part 2