A Wardrobe Malfunction (or Two)

When I saw this prompt…less just say it conjured up some of my “youthful indiscretions”.

These wardrobe malfunctions happened in my early 20s.  Kids, do not try this at home, or anywhere! I was very active in my college plays, doing 16 plays in four years.  After a perfomance , the cast and crew celebrated in which drinking was involved.  (Don’t ever call me a theatre geek, please)

On opening night after the show we would have a wine and cheese party.  The wines were about as cheap and disgusting as you can get.  Being underage, myself and others would down every dixie cup of wine at every chance we could.  We could go out to party with the older kids but wouldn’t be allowed to drink with them, so the aim was to get drunk before we left the theatre.  (Ah, the good old days!)

One one of these nights, we decided to go out to a diner, where alcohol was being served.  It didn’t matter whether I drank or not, as I was so wasted drinking from the wine that came out of a box! I stumbled to the bathroom and afterwards looked in the mirror.  “Looking good!”, I thought.  I was wearing a skirt that night and when I came out of the bathroom a strange woman ran over to me.  “You have tucked the back of your skirt into your panty hose, your entire behind is showing!”

I was scared my friends would find out, plus I didn’t want then to see my butt. But quite a few people got a gander at my gluteus maximasI  I backed up to the bathroom and fixed myself up and they were none the wiser.  So much for “looking good”!

My second wardrobe malfunction happened shortly after graduating.  My long term boyfriend and I moved back into our parents’ homes and realized that “alone time” with each other was going to be very difficult.  We were so used to being together every day and squeezing into his twin bed every night.

One night he came over to take me out to dinner  and we went in my new shiny red Ford Probe.  Feeling pretty amorous that night, but pretty poor, we pulled in to a darkened parking lot.  For the uninitiated, trying to fool around in a car (unless you are in Lincoln Town Car) is pretty difficult.  We made the best of it and then went home.

A week or so later I washed my shiny new red card at the car wash.  The car wash was the kind where you step out of it and the car wash guys swoop in to clean your car inside and out.  After the wash and dry, a lot of the guys seemed to be smiling to me and friendlier than usual.  I didn’t think anything of it until I opened my car door.  There, on the backseat, spread out in all it’s glory, was my white lacey BRA!  How could I have forgotten to put my bra back on that night?!

The car wash guys probably had a good story to tell, only I wouldn’t know because I never used that car wash again! 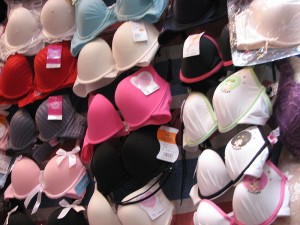 6 Responses to A Wardrobe Malfunction (or Two)