A Christmas Gift Not Well Received

Being uncertain about any of my Christmas gifts being well received, I decided to write about a Christmas gift that scarred me for life.

I was about 13-years-old when the Cabbage Patch Kid phenomenon began.  In August I was at a mall and saw my first one.  She had red hair and green eyes.  I loved her because she was so unique.  I asked my parents if they would buy her for me now and I would pay them back when we got home, but they wouldn’t. Yes, I know I was 13, but Cabbage Patch Kids were special!

And then the craze hit and you literally had to know somebody who knew somebody to get one. Christmas was coming and I wanted one so badly.  Remember the pictures of the parents almost killing each other whenever a store announced that they had them in limited quantities?  My parents were not those type of parents.

Of course since my brother and I no longer believed in Santa Claus, my mother would just wrap the presents as she went and put them under the tree.  There were two fairly big boxes of the same size for my brother and I under the Christmas tree.

My best friend, Jennifer, was fairly certain that she was getting a Cabbage Patch Kid for Christmas, as she did have those types of parents.  She tried to encourage me.  “I bet there is one for you in that big box”!  “I don’t know, it looks a little too big”.  “Maybe your parents are trying to fool you by putting it in a bigger box”!

But I did not have those kinds of parents.

On Christmas morning, I had convinced myself that Jennifer was right, my parents knew how badly I had wanted one.  As we opened presents my parents told my brother and I to open the big boxes at the same time.  We opened them and inside were…sleeping bags!  Sleeping bags? For what purpose these would serve and why they thought my brother and I would like them I still have no idea.

Christmas was over, as far as I was concerned.  The phone rang.  It was Jennifer.  “I got one, I got one, did you”?  I told her what I got instead.  As she enthusiastically described her doll with that baby powder smell, tears ran silently down my cheeks.

Of  course, when the craze calmed down, I became obsessed and owned six of them.

See, I told you I was scarred for life! 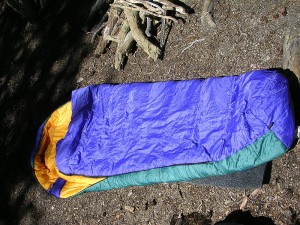 6 Responses to A Christmas Gift Not Well Received