Off to See Santa

Tyler and I started our trek at 11:30 to the mall to see Santa Claus and take holiday pictures.  I felt like I was able to walk so we could go by ourselves.  There was almost no line to see Santa!

Tyler sat on his lap and proceeded to tell Santa his very long wish list.  They looked like they were telling secrets to each other.  It was so cute! Then they snapped a few pictures.  One came out good and then I went crazy as many of us do with pictures and bought $50.00 worth of stuff, including a cute Santa frame.

We started our walk to the department store for his portraits and Tyler said, “I forgot to tell Santa I wanted Wolverine and the Six-Armed Spider-Man DVD”.  (yes, there is such a thing) “It’s okay honey, Santa is magic, he knows your whole list, you’ll get those things.”

As we walked to the portrait studio Tyler began to get more upset and by the time we got there he was near to tears.  Some pictures these are going to be!  I couldn’t believe I was going to do this, but I was going to take him back to see Santa.

So we treked back to see The Big Guy.  This time there was a bit of a line.  I kept checking the time because we were scheduled for pictures at 1:00 p.m.  When it was our turn I explained the issue.  After all, I had just dropped fifty bucks there.  So Tyler sat on Santa’s lap again and mentioned his two last wishes.  Santa nodded and they even shook hands on the deal.

So then we walked back to the portrait studio.  Tyler was so giggly and tired, there weren’t many good pictures to choose from. I ordered Christmas cards, that was it. But now I have buyer’s remorse.  Where was my head?  Where were we?  Now I feel like I should have bought a few pictures instead of just Christmas cards.  How could I not have some more pictures of my darling son? Soon I will go online and further drive myself crazy, trying to choose. 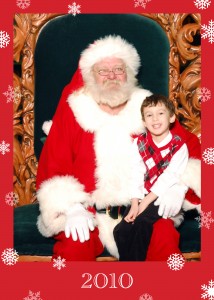 4 Responses to Off to See Santa