So Who Made it to New Year’s Eve?

Having not slept well at naptime, I was exhausted.  I laid down at about 8:00 and told my husband to wake me up at about 20 minutes until midnight, so I could listen painfully to Dick Clark’s attempt to host his New Year’s Eve show.  Why do I tune in to watch his struggle?

I basically just laid in my bed listening to The History of Howard Stern, uncomfortable because of my pain.  I could hear Tyler jumping around and playing, the Energizer bunny.

I got up at about ten and got up on my computer.  Grant and Tyler were watching DVDs.  Tyler was getting a bit tired so I said “Why don’t you just lay down on the couch and we will wake you before midnight so you could celebrate”?  He feel asleep at 11:00.

We tried to wake him up at about five to midnight.  “Tyler, do you want to yell Happy New Year and watch the ball come down”?  He would sit up and then fall back to sleep on the couch.  He was unshakably asleep for the night.  Poor Tyler.

When it turned midnight Grant and I drank sparkling cider and kissed and then we went over to Tyler and whispered “Happy New Year” to him and each gave him a kiss.  Grant carried him to my bed.

I said my usual New Year’s prayer to God, Jesus and my father that this would be a better year for us.  Basically the same prayer I say every year.  But that is for another post.

Hope everyone had a great New Year’s Eve! 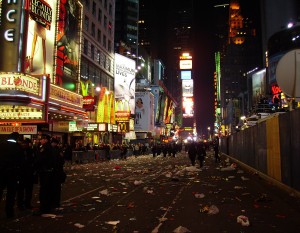 2 Responses to So Who Made it to New Year’s Eve?