An Hour to Kill on the Telephone

Prompt 4.) You have an hour to kill on the telephone.  Who do you call and why?

With no offense meant to friends or other family members, the person I would call if I had the time, the energy and the health would be my cousin, “Denine”.

Growing up, there was a large age difference between my brother and I, and my other aunt and uncles’ children on my father’s side.  We lived in New Jersey and the rest of them lived in Connecticut, which furthered our “gap”.  We all saw each other about twice a year if we were lucky, something I truly regret.  Denine is about ten years older than I, which while you are growing up, might as well be a hundred!

I have a memory of her as a teenager, me as a little girl.  She was sitting on a couch and said to me, “So, Emmy, how’s it going?”, too cool for the room and certainly too cool for me.  All of my girl cousins called me Emmy and I really hated it.  The name is Emily, thank you!

As Denine entered her 20’s and became more mature, and I entered my teens, she began I guess to finally think of me as a “person”.  Plus at that time she bore a strong resemblance to Valerie Bertinelli, during her “One Day at a Time” years.  Valerie was my idol and I started to idolize Denine on her looks alone.  In my early teen years I always made it a point to get some “Denine” time every Christmas.

Denine moved out to Los Angeles, which I thought took a lot of guts and got a job, working as a liaison between movies and the artists who would do the movie’s soundtrack.  She was now uber-interesting to me and still so beautiful!

Denine had some extremely rough years during her marriage and ended up getting a divorce.  In 1997, when I was 27 I took her up on her invitation to visit her out in L.A. and I had one of the best times in my entire life!  She knew I wanted to see celebrities and took me to eat at every celebrity hang out, and we didn’t see anyone!  I remember her saying, “Brad Pitt comes here all the time!”  She did take me to a movie premiere where the then relatively unknown Julia Stiles was starring in a movie called “Wicked”, which you’ve probably never heard of.

I really got the full L.A. experience:  Farmer’s Market, Disneyland, museums.  I loved it and I loved being with her.  I was so surprised that despite her dealing with people in the entertainment world, she was still the same down-to-earth Connecticut girl she always had been.

We were very close after that, and talked pretty often on the phone, sometimes for a couple of hours.  I would tell her all about my boyfriends.  Somehow the conversations were always mostly about me.  I could and did tell her everything. She would always be ten years older than me, but by this point in our lives that no longer mattered.

When Grant met Denine he thought her as interesting and cool as I did and he too would make a point to get some “Denine” time.  She always had the best stories about Hollywood; who was gay, who was cheating on whom, and one time she even told us about a relationship she had with a “Rock Star Who’s Name You Would Know”!

We would see Denine almost every Christmas, with her parents hosting Christmas Eve dinner, which was my favorite meal of the entire year!  But we all get older and her parents no longer have their wonderful Christmas Eve celebration.  The cousins are scattered and unfortunately instead of one of them deciding to carry on the Christmas tradition, we’ve all been kind of doing our own things.

I keep up a bit with Denine a bit through Face Book.  She’s now about 50 and still looks amazingly beautiful, and I don’t even think she’s fallen victim to the Hollywood plastic surgery route!

Why haven’t I made the move to call her?  It’s the same reason I don’t call a lot of people I haven’t called in a while, or seek out old friends through Face Book.  It’s really hard to talk about my how hard things have been for Grant and I, with our health and our finances.  It’s downright depressing and I don’t want to tell her if I call her when she asks how I am doing how we really all are.

We’ll always be cousins, and I hope that some day it can be like it used to be.  In the meantime I will remember all of our good times and the fun talks we had, and what a unique, special person she is. 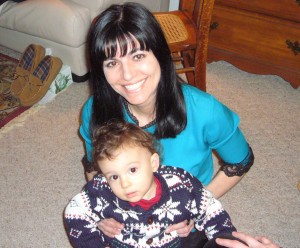 5 Responses to An Hour to Kill on the Telephone