Today was the day we took Tyler to the pediatric orthopedic surgeon to see how Tyler’s elbow was healing from when he fell.  On Tuesday night at the E.R., we were told that Tyler’s elbow showed swelling and that in this type of injury 80% of children have a broken elbow.

We has some trouble on Saturday with Tyler’s splint cutting into his upper arm.  We took him to the pediatrician where she put antibiotic ointment on his wound and padded him up.  We had to change the dressing and medicate the area twice a day.

I was fearing the worst, the literature we were given at the hospital said that he could be in a cast for a few months!

Well, lo and behold, something has finally gone right for us!  The doctor today said after reviewing Tyler’s X-rays and making him move his arm all around that he does not have a broken elbow!  He is in that lucky 20%!  She cut off the nasty splint and just told us to keep a bandage on his wound.  She still wants him to wear the sling and no playground activities for the rest of the week.

I am so relieved.  He should be back to normal next week.  Never has a child gotten as many get well cards, gift cards and gifts for a non-broken elbow! 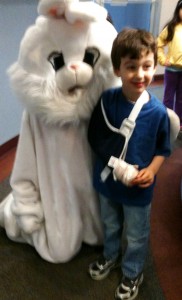 Tyler with the Easter Bunny at the Pediatrician!