My Grandmother and I

I read Tiny Sunbirds, Far Away, by Christie Watson as a member of the From Left to Write book club.  I was given a free copy as part of the book club.  This post was inspired by this book.

(I am writing this post on my husbands laptop, as mine has crashed.  His laptop has a possessive/quote key that works about 25% of the time.  As he is a professional writer I do not know how he can stand this, but there it is.  I write this to let people know that my grammar and editing are much better than it would appear. Thank you.)

When 12-year-old Blessings mother leaves Blessing and her brother Ezikiels father where they had lived a comfortable life in Laos, Nigeria, she takes them back to where she grew up, in a village in the Niger Delta, a very poor and dangerous area.  Blessing and her brother had never met their grandparents, as they had never accepted the fact that their daughter had married out of her tribe.

As I read this marvelous book, with the theme of the relationship between Blessing and her Grandma, called Grandma by all, I could not help feeling the parallels of the relationship between my Grandmother and me, although this is not Africa, and although we are white people, and the lives lived by Blessing and her family could not have been more different.  What I saw was the strong bond between a grandmother and her granddaughter, no matter where you live or who you are.

My grandparents, Papa and Nanny, were Jewish and so were not too pleased at first that my mother was going to marry a Catholic man, and even less pleased when my parents were going to raise us Catholic.  As a child, I never really felt that to be an issue.  My grandmother was born in 1912 in Portland, Maine, and her neighbors were Italians so my fathers beliefs and cultures were not foreign to her.

I was her first grandchild, and it appeared that she loved having a granddaughter, having raised two daughters of her own. She always called me Dollface and I always felt so special whenever I was with her.  I always felt I was the favorite of her five grandchildren, but perhaps my brother and cousins might have felt the same feeling!

Like Blessings Grandma, she loved to tell stories, and I loved to listen.  About how she came to New York to live and work when she was around 20. About how she and her friend were lost in the city and how she remembered that her mother told her that if you were lost you should always ask a policeman, which she did, who wound up giving them information about a blouse factory who was hiring and how she got a job working there.  How she worked as a runway model for the buyers as a side job and got to keep all the clothes.  Oh, how I wished she still had them, blouses from the 1930s, but she had so many she would give them to her friends.

And the most famous story, of how she met my grandfather, the one she told me over and over again.  Her maiden name was Hirsch and suddenly Hershey Bars began appearing in her top desk drawer.  She thought it was a homely and heavy man named…Oh, who knows, I might insult his grandchildren.

She went over to him and said, Paul, thank you very much but I cant accept these chocolates.

Ill take ONE, but it wasnt me who has been buying them for you.

Do you know who is?

Nanny was pretty happy that it turned out to be Ira.  He looked like Clark Gable, she told me, and I guess I saw the resemblance a bit.

They were married in 1939.  They waited a long time.  My grandmothers parents were both sick and she felt she could not marry because she had to take care of them.  As Grandma told Blessing, We must row in whatever boat we find ourselves in.

My grandparents had a lot of trouble making ends meet and supporting their two daughters.  Papa worked as a manager of a chain store called National Shoes, and also worked as an usher at a movie theatre.  I dont know how many full time working moms there were back then in the 1940s and 50s, but my grandmother was one of them.  The only job I remember her telling me about was that she worked in a bakery.  Much later she worked as a bookkeeper for her landlords chain of buildings and received a salary and a free apartment, I believe. She worked her whole life, until she retired in her late 60s. It kept her young, I believed.

Nanny and I had so much in common.  We liked the same foods, the gossip magazines and even game shows.  I often thought my mother was jealous of our relationship, but it was as if a generation had been skipped, and I was more her daughter than her granddaughter when it came to being so close and being so similar.

I always felt I could tell her my secrets.  I remember one day we were playing the card game Gin.  She was amazing at all card games and numbers, the one thing unfortunately I didnt inherit from her!  I usually always lost, but I just liked playing with her.  One day while we were playing, I was in my early 20s, and the issue of sex came up.

You havent had sex, have you?, she asked me.

I had had only one real boyfriend and yes, of course we had sex but I couldnt tell even tell my Nanny that one!

You have! You have!  I can tell by the look on your face!

She knew me so well.

Well, you havent done it a lot have you? She was grimacing.

No, I said quickly, for her own sake.

Afterwards I lost every gin game for the rest of the night.

My grandmother lived until her early 90s, but unfortunately developed Alzheimers in her mid 70s.  She never stopped recognizing her immediate family, but never could grasp the concept of boyfriends or husbands, or having a great-grandaughter.

A swift bout with cancer, over just a few months, ended her life.  I never cried over her death for two reasons.  One, because to me, she died a little ever day due to the Alzheimers and two, she was very scared to die, she wanted to live forever.  She had lost that concept when the Alzheimers fully set in.

Like Blessing and her grandmother, and like my Nanny, I too am a storyteller, except now we call it…blogging. 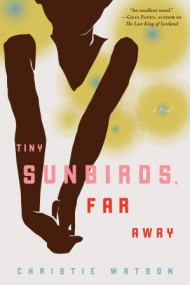 5 Responses to My Grandmother and I