Trip to The E.R: The True Story!

I don’t think I have written a lot (or anything, who remembers?) about what has been going on with my back so here’s a quick summary of the past three months or so.  The pain is located right around my left sacroiliac joint, that joint right above your tush.  When it started I didn’t think much of it, another pain to add to the rest of my pains.  But it hung around and started to gain in intensity to the point where I was at a “10” on the pain scale at times, to the point where I was laughing and crying at the same time, and felt like I was going insane.  My Percocets weren’t helping, so what I had been doing was the pain was around an “8” or up I would sedate myself, knock myself out, so I could sleep through it.

During this time, Grant was begging me to go to the E.R., but I hate going there.  Mostly I find it to be a huge waste of my time, no help, no results, etc.  You can read more about my last E.R. visit here.  I literally have to be near death to go there I hate it so much!

My PCP had diagnosed me with inflammation of the sacral iliac joint, but you can’t really get a diagnosis by someone just poking at your body!  I wanted to consult with my Rheumatologist due to my feeling that it was a joint issue and he was a good second “go to” guy.  At my March appointment he wrote a prescription for X-rays. This past Monday was my April visit and he said the X-rays showed nothing, but we both agreed the X-rays don’t tell the whole story, or in my case, tell nothing.  He wrote a prescription for an MRI but that is something that requires pre-authorization from the insurance company so his office manager set about procuring the authorization.

On Thursday my back pain hit a different level.  The only time my back didn’t hurt was when I would wake up in the morning, but on Thursday, there it was.  I was at my limit.  Insane back pain with no break!  Grant and I discussed the E.R. and I was weakening.  On Friday morning I told him I was going to go.  I took a shower, got dressed, got some entertainment together; the book that I am currently reading for my book club, The Sound of a Wild Snail Eating, Parents magazine, my newspaper and my iPhone.  Then I called 9-1-1.  For the uninitiated, it is always best to go by ambulance, otherwise you are stuck in the waiting room for God knows how long.

Unfortunately, it was an extremely busy day at my hospital’s E.R.  I was triaged to the lowest ranking E.R. I did not even rate a bed, I got to sit in the most uncomfortable semi-reclining torture device known to man which made my back feel even worse.  The nurse came over and took my vitals and wrote them on a napkin.  Now, one of my followers on Twitter told me that she was in the healthcare industry for years and this is very common, but it wasn’t to me!  I’m thinking, Should I just walk out of here?  Is this the biggest mistake of my life?

If you are wondering if Grant came with me, the answer is no for a few reasons.  He had an appointment with his therapist, we didn’t know how long I would be and he wanted to be closer to home for Tyler, who was in school, and he also has Post Traumatic Stress Disorder, or PTSD.  In fact, his PTSD is from being in hospitals.  I was fine without him.  I had the above mentioned entertainment and my wonderful friends and family on Twitter and Face Book!  I want to thank everyone who was virtually there for me, you were wonderful support!

The Physician’s Assistant ordered a CAT scan and morphine for me, yay!  I am no drug seeker but as those who have chronic pain know, I needed a BREAK.  For the first time in months I didn’t want to feel that back pain.  I was also happy to be getting a CAT scan.  The nurse gave me the morphine shot in my left shoulder which hurt like hell, and, because I have Fibromyalgia, actually made my other shoulder hurt too.  I was waiting to feel loopy and…nothing.   No loopy.  No relief.  Nothing!

I got my CAT scan and told the nurse that the morphine did nothing for me and she told me they would give me something else.  Grant showed up,  the hospital was literally on the way home from his therapist’s.  We kissed and hugged, he held my hand but what else could he do for me?  By the way, the whole time I kept asking for something to drink, something to eat, anything, and I never got so much as a swig of  water!  This place was worse than prison.  Luckily I had brought coffee with me and had eaten a string cheese at 7:00 a.m.!

The nurse gave me a shot of Dilaudid and once again, I got no relief.  Grant said by now he would have been totally loopy but I could have operated heavy machinery for all it had done for me.  By this time, Grant was getting upset over my lack of care, I hadn’t even been seen by a doctor and I had already been there for THREE hours!  Plus, his PTSD was kicking in.  He told me he was sorry but he had to go and I understood.  He later told me that while walking back to his car he was crying so hard that someone stopped him to ask if he was okay.

I told the nurse that the shot of Dilaudid hadn’t helped.  At this point I found out that I was triaged so low that there was no doctor in my part of the E.R.  Can you believe it?  I never got to see a doctor, apparently I didn’t rate. How can there be no doctor in an E.R.??  I was glad that Grant had left because he would have gone ape shit if he knew that.  I got a second shot of the Dilaudid and still nothing. I walked over with my cane to tell the P.A. that I had gotten no relief and that I have given up the hope of getting relief.  She said, “Well, sometimes we can’t take all your pain away” and I said, “No, literally I have had no pain taken away.”

Finally I got the results of my CAT scan which I will put here in hopes of some advice from those who have “been there”.  I have not had the time to even research what some of it means.  “Mild posterior disk bulges from L3-4 to L4-5. There is a left conjoined nerve root vs. disk herniation at L5-S-1…MRI (recommended) for better characterization of degenerative disease.”  Like I said, I don’t know what it means but it sounds very scary.  I am scared.  The P.A. referred me to a spine specialist and told me that things might move faster with the insurance company now that I have a bit of a diagnosis, a CAT scan and a trip to the E.R.  So, as inhumane as my experience was, it was good for a few things.

I am happy to have a diagnosis but I am also frightened as I realize that this is only the beginning with a new condition for me that I know very little about. 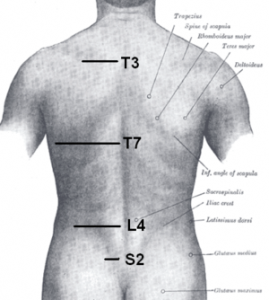 8 Responses to Trip to The E.R: The True Story!