I used to think the people who shopped on Black Friday were insane.  Camping out days before, fighting for the last toy, spraying pepper spray at their fellow shoppers…I couldn’t understand it and certainly would never be a part of this mind-boggling ritual.

Today I am shopping on Black Friday for the first time.  Not because I have become insane or because I wish to mace my fellow man, but because I have to.  My son needs new boots and sneakers and a BF sale is the only way I can afford to buy them.

We have to go out on BF.  Our children won’t understand why Santa did not give them their #1 toy.  Spouses want to give their significant others a special gift.  They have to get presents for their children’s teacher, bus driver, and whomever else is expecting a gift in their lives.

I understand the crazy desperation of the shoppers.  It is the same way at the Food Bank.  Those who get there two hours before it opens so they can be toward the front of the line.  Those who argue with people about who got out of line.  All of them desperate that the Food Bank will run out of food, even though if one is towards the front of the line it is obvious that they will get food.

The next time you watch video of shoppers winding around the building waiting for Walmart to open, or parents fighting over the last latest Elmo toy in the store, try to remember that they may not have a choice, that they may not be doing this for fun.

I am going out on Black Friday.

But I promise I will not be bringing pepper spray. 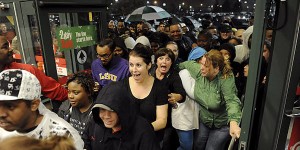