Tyler made his Sacrament of Reconciliation, or first confession, this past weekend. I’ve been a really bad Catholic mom, normally not taking him to church. Being depressed, I have a hard time wrapping my mind around getting ready for mass, dressing, hair, makeup, and getting Tyler ready. We usually call Sundays our “lazy Sundays” or “do nothing days” and spend the day in our pajamas.

Tyler has a more difficult time sitting or standing still during the service than other children. Although he has never been classified as hyperactive, he swings his arms around, lays down in the pew, or stands on the kneelers to see better. I have gotten a lot of stares but I know he can’t help it.

When Tyler started the Parish School of Religion (PSR) in first grade I explained to the Head of PSR that while Tyler was in a mainstream class at school he was receiving some special services and that he was subject to tics and wild movements with his arms and was delayed in fine and gross motor skills. She didn’t think it would be a problem, and for first grade and up to now in second grade it hasn’t been.

Although there have been no problems, I’ve always gotten the sense that I was unpopular with the Head of PSR. I’m a separated woman whose husband is Agnostic and I have a boyfriend. We are not the typical Catholic family, that’s for sure.

Anyway, Saturday was the big day when Tyler would make his first confession. He was his usual fidgety self. I tried to calm him down but got little results. Just before the children were going to share their confession with the priest, Tyler told me he had to go to the bathroom. Ahh! He didn’t know where it was so I took him. Suddenly we were approached by the Head of PSR.

“I’ve been watching you!”, she said to Tyler, “And you’ve been doing nothing but fooling around, stop laughing this is a very serious day! And what are you doing up?”

“He has to go to the bathroom!”, I protested.

“Well he should have gone before we started!”

After chastising him some more she left.

“I think she is really cranky”, Tyler said.

Looking back, I feel I should have defended Tyler better. I’m angry that she yelled at Tyler as if I wasn’t even there. Maybe I felt like a kid myself being yelled at, going back to my own days of Catholic teaching.

Soon Tyler was standing in line for the priest waiting to make his first confession. He was his usual, bouncy self, even making the girl behind him laugh.

Tyler may not be able to stand still but he is always smiling and laughing and his good nature is infectious. I’ll be damned if I’m going to stifle it. 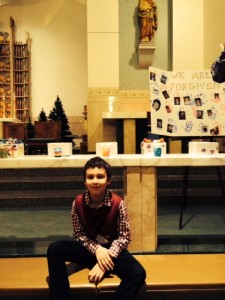 One Response to Tyler’s Confession