The Thing I Can’t Change

Prompt 2. If there was one thing you could change about yourself, what would it be? Why can’t it change?

If I could change anything about myself it would be my mental health. My problems began shortly after I had Tyler and since then I have never been able to get a grip on my brain.

On January 24th, 2012 I attempted suicide. While in the hospital I was diagnosed with Bipolar Disorder. I was hospitalized for two weeks with Intensive Outpatient Therapy to follow. For months I remained depressed with Suicidal Ideation which is fantasizing about suicide.

I had a few months of feeling pretty well when we moved to Ohio and then I started cycling towards Mania. This was right around the time Grant and I split up, December of 2012. I credit my hypomanic state for giving me the courage to leave my marriage, but eventually I went Manic and had to be hospitalized.

Tyler stayed with Grant while I was in the hospital. Being paranoid is part of my mania and I thought Grant would use my mental illness to sue me for custody of Tyler. I felt like I was imprisoned during my hospitalization, I couldn’t wait to get my son back. I didn’t understand that the doctors were trying to make me better. Thank God I had my new boyfriend, Jacques, coming to visit me.

I stayed in the hospital for two weeks and felt better but the medication made me zombie-like and foggy and soon caused me to be depressed. I felt like I was moving through molasses. About a month after being released from the hospital for mania, I went in again for depression. Another two week stay and I was released feeling no better. Tyler was staying with Grant because I didn’t feel functional enough to take care of him.

I started to get better and went back to having partial custody of Tyler. I always felt depressed, although I was able to take care of Tyler. Jacques helped out by doing the cooking and cleaning for me.

This isn’t the post for me to write about what being in a psychiatric hospital is like but I will say that for me, they can be scary places. Rubber rooms, padded cells, straightjackets, shots to calm you down if you are out of control…they have them all, although I have never needed them. Seeing people worse off than you can be scary as well.

My last manic episode was this past May. I had been put on Ritalin in the hopes of clearing up my brain fog and mania is a possible side effect. I got off the drug pretty quickly because I started having symptoms. My paranoia was back and I had a huge fight with Jacques, accusing him of making me sick. One day I felt faint and was having chest pains. I couldn’t breathe so I called 9-1-1. I was alone and scared to death.

When I got to the hospital I had a full-on manic episode. I was hooked up to the heart monitor and I had an auditory hallucination that it had stopped beeping and made the steady sound like I was dead. But I was still moving around. In my delusion I felt that I had died and was a prophet, kind of like Jesus. (Damn, but I am a crazy bitch aren’t I?) Religious delusions are actually quite common in mania. I’m not quite sure what I said in the emergency room, what was real, what was in my head, but I told the doctors and nurses that I had died and death was painless.

I obviously got sent to the hospital. I was still very deluded and so this stay was a peaceful one. I saw signs of Jesus all around me, like in the graffiti. I thought all the patients, doctors and nurses around me were either angels or devils. I was smart enough to keep these thoughts to myself. I stayed in the hospital again for two weeks, but mostly to monitor my physical conditions because I had also been diagnosed with diabetes and asthma.

When I got released, Jacques picked me up and my delusion went away.

Since then I’ve been on the depressed side, not suicidal, not thinking about it in any way but just struggling.

Every time I get out of the hospital I say that this time will be my last but I can’t say that for sure. I don’t know if I will ever feel balanced again. I know that some people can live normal lives with bipolar but that hasn’t been my experience. In the meantime I just take my medicines, go to therapy and hope that there will be a better course of treatment for me. 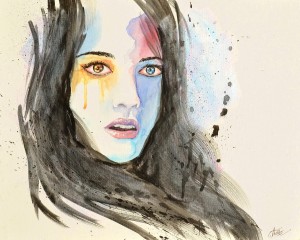 12 Responses to The Thing I Can’t Change