A couple of weeks ago eight and a half year old Tyler asked me if the Tooth Fairy was real. After much stalling and deliberation I decided to tell him the truth and he was okay with it. He didn’t ask me about the Easter Bunny or Santa Claus and I was relieved.

But this weekend he asked me if the Easter Bunny was real and I decided to tell him the truth. “You’re the Easter Bunny?!”, he asked incredulously. And then, “Is Santa Claus real?” and I told him that yes, Santa Claus was real. At first he said okay but then after a minute of deliberation he asked, “Is Santa Claus really real, mom?” I hesitated and he said, “If he’s not real, I’ll be okay with it”, shrugging his shoulders. I looked at him and it was like I flash-forwarded to him as a teenager. It was just the way he looked and the way he said it. He was so mature. I told him that Santa wasn’t real either. “You mean you’re Santa???!!!” At first he looked sad. I told him that Santa Claus was based on Saint Nicholas and that we could read about it if he was interested but he wasn’t.

Later he asked me, “Was Santa Claus alive when you were a kid, did you get presents from Santa?”, and I told him that Saint Nicholas lived hundreds of years ago.

I think I was more upset about telling him Santa and the Easter Bunny weren’t real than he was; that loss of innocence. Of course, now that he knows that I am the Easter Bunny he told me the toys and candy he wanted for Easter and it sounded like a Christmas list!

Most of the magic of Easter and Christmas is gone for Tyler now, never to be the same, but I’m glad he was grown up enough to take it alright.

Does your child still think the Easter Bunny and Santa Claus are real? 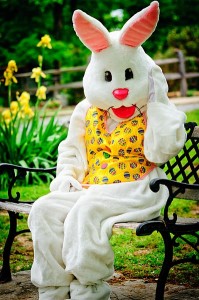 2 Responses to The Awful Truth