Complimentary tickets were given to me by Nickelodeon.

Grant, Tyler and I went to Nickelodeon Presents Storytime Live this past Tuesday at the State Theatre in New Brunswick, NJ.  The show is four musical stories in one, with Moose and Zee as your hosts.  It features Kai Lan, The Backyardigans, The Wonder Pets and the biggest hit among the kids, Dora the Explorer.  I had a couple of concerns before going to the show:  1. Would the music be too loud and freak out my little boy?  2. Would Tyler use the public potty? (More on that later.)

I was very pleased to note that the volume of the show was perfect.  Tyler is sensitive to loud noises and had no trouble at all with the show.  The show is a mixture of real people and people in costumes with their faces showing.   At one point Tyler asked me, “Mommy, why are the animals dressed as people”?  Still, he was undaunted and he looked at the show like he was at home watching television.  The show is interactive and Tyler and the rest of the kids shouted out and moved around. 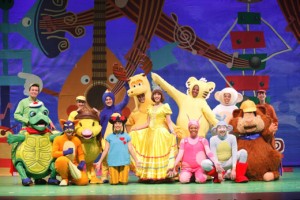 Something that I didn’t expect to happen was how much Grant and I would enjoy the show. Not just because Tyler enjoyed it, but because it was actually funny and well produced! The sets and set changes were a lot more complex than I had anticipated.  The special effects were just right and not too scary.

There was an intermission between the four stories.  Grant went to get refreshments and five minutes into the intermission Tyler looks at me and says, “Mommy, I have to go pee pee”.  I’m like, okay, okay, grabbing a bag that could hold everything that a kid could ever need when he uses a public bathroom.  I was nervous because Tyler has a fear of public toilets and usually will just “hold it”.  So I take him in and I am trying to get the sanitary cover on the seat.  It’s sliding around and Tyler says, “Mommy, I’m just going to pee standing up”!  Which is no easy task in a ladies bathroom if you happen to be three-and-a-half.  But he did it and I was so proud!

When the show started again The Wonder Pets came on.  We had bought Tyler a Ming Ming the duckling digital watch and he was holding it up to show it to Ming Ming.  The Wonder Pets are the actual pets with people behind them, like giant puppets.  Of course we told Tyler, “Ming Ming sees you, she’s looking right at you, she sees your watch”!, and he was really excited.

I would definitely recommend this show for kids two and up, although certainly there were even younger children there.  If your children are fans of these shows it will be the equivalent of a rock concert for them.  The show tours throughout the country through October.