(Usually this is the time where I write a light piece about something funny Tyler has said or done.  However, this time isnt it, so if you are looking to have a smile or a chuckle, you may want to skip this one.  However, it is a post that must be written and read, particularly if you are a chronically ill mom as it is every sick moms worse fear.)

On Sunday, my mother, who was visiting, Tyler and I went to a mall.  We had to walk from one end of the mall to the other.  My leg hurts! Tyler complained.  I didnt think much of it, I really thought he just wanted to go home because he was bored.

Yesterday morning when he got up, he called to me, Mommy, my leg hurts, I cant walk!  Of course I was frightened.  I asked him where the pain was and he pointed to his groin area.  He asked for a juice box and as usual I said, You can get that, Tyler.

No, mommy, I cant because I cant walk, I told you!

Now I was scared.  Grant, like a dummy, I thought, held a piece of chocolate out to Tyler and made him walk over to get it, as if he were some sort of a dog!  Tyler limped over to get it.  At this point I was calling the pediatric emergency triage line.  They suggested bringing him in to an appointment.  Due to Tyler being a boy, you did not want to fool around with the testicles and penis.

After examining him, the pediatrician found the pain was more local to his left hip.  The doctor felt that this was due to a post-viral complication that some children get, and that Tyler had temporary arthritis in his hip!  He told us that if it was still happening by Friday that he needed to be brought back in for some testing.  I did not want to know what the testing was.

Due to Tylers Tourettes, OCD, Anxiety, and Sensory Processing Disorder, going to the doctor is like torture for him, much more than the usual child.  I was pleased to see that he did his best ever!  When Tyler is sick we give him a Well Prize.  He knew exactly what he wanted and wanted to go to the Disney Store to pick up his Spider-Man action figure.  The mall that has a Disney Store nearest to us is about 40 minutes away.  But I had promised.

So my mother, Tyler and I piled in to the car and went off.  We had to rent one of those fire engine cars that you take your child around in.  It was either that or a wheelchair, and I did not want him to be scared.  He had a blast in the fire engine and loved getting his prize.

Until it was time to go to the bathroom.  I wanted to get a man to carry my son to the family bathroom, but he insisted on walking and when he did I just about died.  My little boy, limping like Tiny Tim, bravely walking to the bathroom.  Everyone starring at my crippled little boy.  I got sick thinking about it.

What if he was going to end up like me?  What if he has just gotten Auto Immune Disease from a virus, the same way it is theorized that I did?  What if he has that propensity within him, that makes him vulnerable to the same things I have?

Of all of the things that I have suffered through this week and a half, two trips to the emergency room, a fire in my kitchen with Grant being burned, my mother and I being stung, this was by far the worst thing of all, seeing a glimpse of what every chronically ill mother fears; their child suffering like she does!

Today was a better day for Tyler, so I am praying that the worst is over.  And that nothing like this rears its ugly head again in Tylers life, so full of promise. 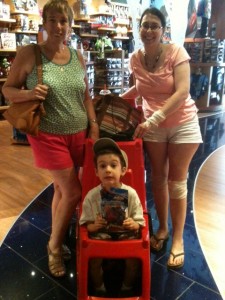 Mom and I at the Disney Store, with Tyler seated in his fire engine, holding on to his Spider-Man villain for dear life!