Results of My Challenging Week

I first wrote about this here.

Last week Tyler had full day summer camp and Grant and I decided he would spend the whole week with me since the camp’s location was closer. The week passed quickly, thankfully, and Tyler really liked his camp!

After camp on Monday I took Tyler to the pool so he wouldn’t feel like he was missing out on his beloved water slide! He had therapy on Wednesday and I told him I would take him to the pool afterwards but it was late and he decided he wanted to catch up on his video games! I was exhausted so I didn’t fight him on it!

We did have a couple of nights of trouble. I am trying to get Tyler to sleep in his own bed but lately his fears and anxiety are getting worse. He insists on sleeping with the light on and he got up with nightmares. I tried to settle him down but the sleep medication I take made me so groggy that I could barely stay awake to comfort him! I felt awful about it, but if I don’t take the sleep med I will never get to sleep and then I won’t be good to anyone.

Two days later the nightmares happened again and he wanted to call Grant so I let him. We tried using the techniques his therapist is working on with him to calm him down and they did work. But I was still very groggy. Grant was mad at me. He called me a bad mother, which hurt a lot. I believe I am doing the absolute best I can for Tyler. The next day Grant apologized.

These past two nights he has slept through the night so I am hoping he just had a bad few couple of days.

So I made it through the week! Grant and I let Tyler have a couple of weeks off from school to decompress but now we’ve got to work in speech, occupational and physical therapy activities into his day, along with reading and flash cards. Plus he is still taking Tae Kwon Do. It’s a lot for any parent to do, let alone someone who is chronically ill!

I’ve actually had a couple of bad days where on Saturday I napped for four hours during the day and on Sunday I slept for three. I can tell it’s not from depression and I worry that I am developing a tolerance to my medicine for my hypersomnolence. But it’s only been two days so I shouldn’t freak out, right?

I am not a perfect parent, no one is, and I am not a bad mother, I am a sick mother. Sometimes I have my doubts but Tyler still says I am the best mom in the universe! 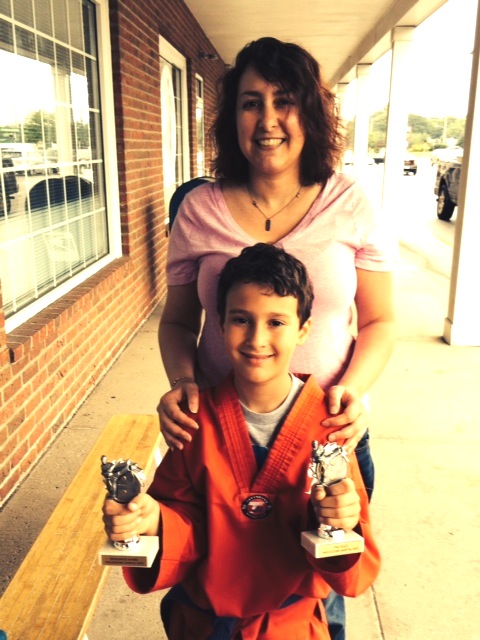 Tyler after his Tae Kwon Do tournament last week, which was a victory for him…and me!