Pets of the Past and Future

1. Throwback Thursday: Choose a photo from a previous July and write a poem or a blog post. 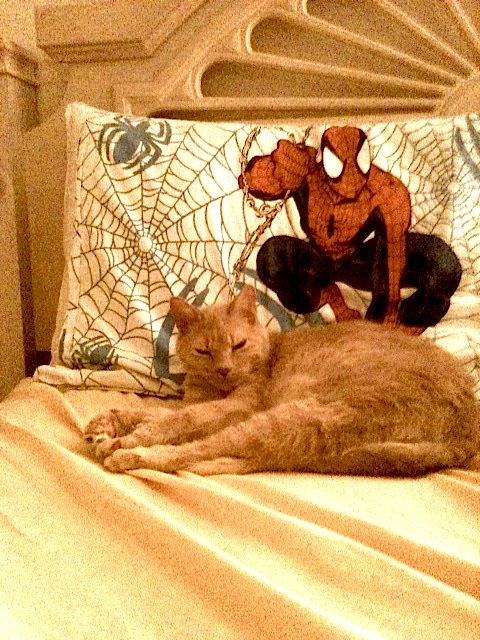 This photo goes back to July of 2011 and is a picture of my cat, Lizzie, who threw my husband out of bed and slept with me all night. Lizzie and her sister, Rosie, were the first cats I had when I left my parents’ house. They were a symbol of my dependence, my foray into adulthood.

I got them when they were six and half weeks old and they still hadn’t retracted their claws yet. Lizzie and Rosie were special, and it wasn’t just me who thought so. Even people who didn’t like cats loved them. Rosie was born with a problem where her knee would dislocate. As she aged the problem became worse and when surgery was finally warranted she was declared too old to go through it. That didn’t stop her from still having some good years left and being a loving companion to me. When I was bedridden from chronic illness, she laid right next to me, moving only to eat and go to the bathroom. Maybe it sounds silly but I thought we understood each other. Rosie died at age 12 of kidney failure due to lack of movement.

Lizzie made the move to Ohio with us. She died of cancer when she was 15. I am so glad my son had the opportunity to know both of them.

I grew up with a cat named Whiskers who was a diabetic. My dad had to give her insulin every day. She was worth all the medical care needed. She was a Siamese and super affectionate, especially to me. She was the one I told all my secrets to, the one I cried to. She died when I was in college and when I found out I asked my professor if I could reschedule my midterm due to a death in the family.

I have four cats now, two who are indoor/outdoor and two who live on our porch. We provide warm shelters for the outdoor cats in the winter. My indoor/outdoor cats are Max and Rosie. Max has been gone for six weeks. He is known for striking out for parts unknown and just showing up out of nowhere. Sometimes we think he has another family or two. I pray every night for him to be okay and come back. He is my son’s cat and he would be so sad if we declared him gone permanently.

Betty…I just can’t figure her out. She used to love and cuddle with me and now doesn’t want much to do with me. I’ve never heard of a cat who grew to love you less! It’s clear Jacques is her favorite but she is enjoying the summer, stopping in for a short time every day to eat and drink before meowing to go out again.

If Max is truly gone, I wonder if I should get another cat. Allowing my cats to go outdoors has been the worst thing I could have done and I never want to do that again. I think of a cat who is super affectionate and who would cuddle with me. I wouldn’t want a kitten, I’d want a cat on the younger side whose personality is fully formed.

I’ve had the priviledge of being the mom to many cats and each one was different. They have all brought meaning to my life and have even helped shaped my growth.

Part of me is excited over who my next friend will be.

11 Responses to Pets of the Past and Future